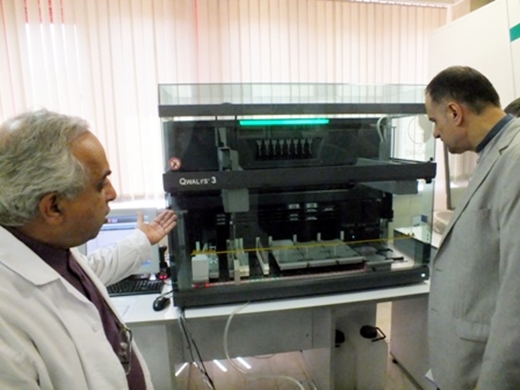 Head of Iranian Blood Transfusion Organization's Immune-Hematology Laboratory said Sunday that 22 advanced world countries have national rare blood production programs, but Iran is the only developing country with such a program.

‘According to the latest statistics today 8,000 units of rare blood exist in the Rare Bloods Bank of the WHO/ISBT in frozen form,’ said Dr. Mostafa Moqaddam in an interview with IRNA.

He reiterated that having a rare blood bank is one of the indexes of the high standards of a blood transfusion organization since its proves that in addition to meeting the demands of the day it has managed to assist the particular patients in need of such bloods.

The head of Iranian Blood Transfusion Organization’s Immune-Hematology Laboratory said that the Iranians decided to have a native national rare bloods program in our country.

‘In this program instead of running into a rare blood patient accidentally we arrange for programs to be able to assist the patients in need of such bloods wherever they might be,’ he said.

He said in order to do that we divide the people in five to ten thousand member groups for the ten regular blood types, identify the people with rare bloods among them, and then establish our rare bloods bank based on that data.

‘Such individuals also receive plates on which the information about their rare blood is inscribed, are trained and instructed to keep in touch with us constantly so that they will always have access to the blood they might once need,’ he emphasized.

He said that the information about such individuals is updated in the Blood Transfusion Organization’s website constantly.

He said that January 11th is nominated as the National Iranian Rare Bloods Day, because on that day an 18-month-old girl who had heart chamber problems was to go under a surgery and no regular blood type matched her blood.

‘The Blood Transfusion Organization provided the required blood for that little girl and she is now six years old living a healthy life, which is indebted to our organization’s Rare Bloods Bank.’

Dr. Moqaddam said that that little girl was the youngest patient saved thanks to launching this program and that was the reason why January 11th was named the National Iranian Rare Bloods Day.