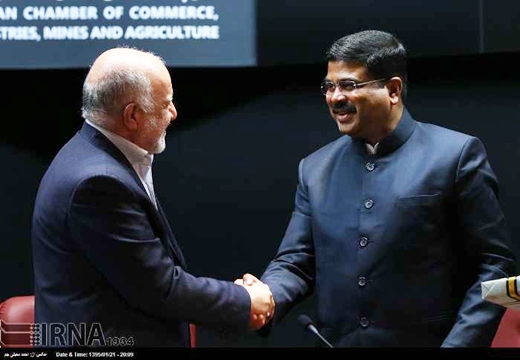 Iranian Minister of Petroleum Bijan Zangeneh says Tehran is interested to joint refinery projects in India in a bid to ensure sale of its crude oil in the Indian market.

“Financially speaking, Iran is a country that seeks foreign investments rather than being an investing country itself, but it has to take some measures to enhance its [crude oil] exports,” said Zangeneh in an address at Iran-India business conference at Tehran Chamber of Commerce Saturday evening.

He expressed hope that the preliminaries for long-term cooperation of Tehran and New Delhi in energy projects will be provided in the near future.

“Indian companies are skilled in petroleum engineering and meet international standards in their works; therefore, Iranian companies may take this opportunity to boost their cooperation [with their Indian opposite numbers],” the top Iranian energy official said.

He said Iran is in need of petroleum industry machinery and equipment, adding that Indian and Iranian companies can join to build the equipment for domestic consumption or export to regional markets or to each other.

“There is a good market in Middle Asian countries and the Persian Gulf regions for export of [petroleum] equipment,” he said.

The official further said Iran enjoys the world’s biggest natural gas reserves and is the only regional country that can export the product so far as regional countries lack gas reserves, except for Qatar, which has no capacity to boost its exports.