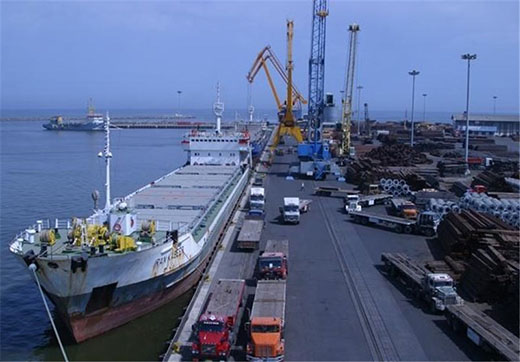 Defying US warnings, India has signed an agreement with Iran to develop a port in the southeastern province of Sistan-Baluchestan.

Iran and India reached a deal to develop a strategic port in southeast Iran despite US pressure on New Delhi not to rush into any such trade agreements before world powers clinch a final nuclear accord with Tehran.

Iran’s Minister of Road and Urban Development Abbas Akhondi and Indian Shipping Minister Nitin Gadkari signed a memorandum of understanding (MoU) on Wednesday to develop the Chabahar Port on the Sea of Oman, near Iran’s border with India’s arch-rival Pakistan.

Chabahar port is located in Sistan and Baluchestan Province on Iran’s southeastern coast and is of great strategic utility for India which will get sea-land access route to Afghanistan bypassing Pakistan.

The port will be used to ship crude oil and urea, saving India transportation costs.

“With the signing of this MoU, Indian and Iranian commercial entities would now be in a position to commence negotiations towards finalization of a commercial contract under which Indian firms will lease two existing berths at the Port and operationalize them as container and multi-purpose cargo terminals,” an Indian Ministry of External Affairs statement said.

Earlier on Wednesday, Iranian President Hassan Rouhani referred to Iran-India joint project to develop Chabahar port, and described it as the opening of a new chapter in bilateral relations.

“We welcome the presence of Indian investors in the development of Chabahar port and other southern ports as well as the construction of roads and railroads,” Rouhani added in a meeting with Indian Minister Gadkari in Tehran.

India and Iran agreed in 2003 to develop the port, but the venture had made little progress because of Western sanctions tied to Tehran’s peaceful nuclear program.

Encouraged by a provisional, April 2 deal over Tehran’s nuclear program, India recently sent a delegation to Iran to scout for trade, energy and infrastructure deals.

However, the United States has expressed concern that India is moving too fast and could undermine a sanctions regime imposed on Iran.

In the past few years, India and Iran have been working towards developing energy and economic cooperation. India is among Asia’s major importers of energy and relies on Iran to meet a portion of its energy demand.