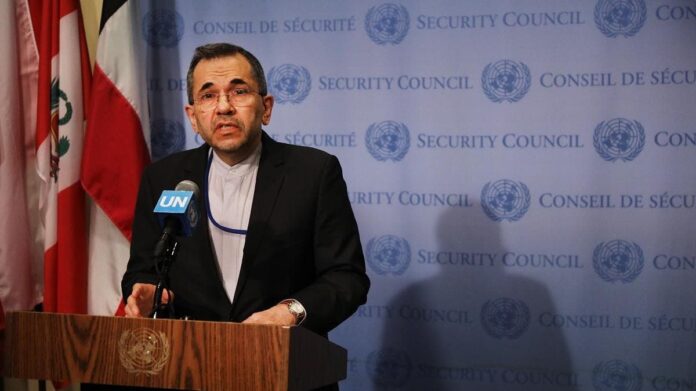 Illicit trade in small arms and light weapons not only exacerbates violence, but also fuels crime and terrorism across the globe, Iran’s permanent ambassador to the United Nations (UN) warns.

“We share the concerns about humanitarian, socio-economic and security consequences of the illicit trade in small arms and light weapons and their diversion to unauthorized recipients,” Majid Takht Ravanchi said in a Monday address to the High-Level Meeting of the General Assembly for the Appraisal of the United Nations Global Plan of Action against Trafficking in Persons.

He added that the “Program of Action to Prevent, Combat and Eradicate the Illicit Trade in Small Arms and Light Weapons in All Its Aspects” (PoA) is the only universal framework to address these multifaceted challenges.

“As a victim of foreign-backed terrorists, and faced with the threat of organized crime and trafficking in drugs linked to the illicit trade in small arms and light weapons, the Islamic Republic of Iran highly values the Program of Action and calls for ensuring its balanced, effective and full implementation including through identifying and addressing its implementation challenges,” Takht Ravanchi continued.

Iran’s ambassador to the UN stated that according to the Program of Action, “the illicit trade in small arms and light weapons in all its aspects sustains conflicts, exacerbates violence, contributes to the displacement of civilians, undermines respect for international humanitarian law, impedes the provision of humanitarian assistance to victims of armed conflict and fuels crime and terrorism”.

Takht Ravanchi, however, warned that in all efforts to combat the illicit trade in small arms and light weapons, the right of each country to manufacture, export, import and retain such weapons must be fully respected.

“Additionally, the scope of such efforts by the [Security] Council must be limited to those aspects that are related to serious adverse impacts of diversion of, and illicit trade in, small arms and light weapons on the conflict concerned,” he noted.

The US, Britain and some other Western governments have for years been involved in the provision of arms and weaponry to conflict zones across the world, and in particular, West Asia.

Earlier in the month, the US State Department approved the sale of $650 million worth of air-to-air missiles to Saudi Arabia to help Riyadh press ahead with its protracted military aggression against Yemen.