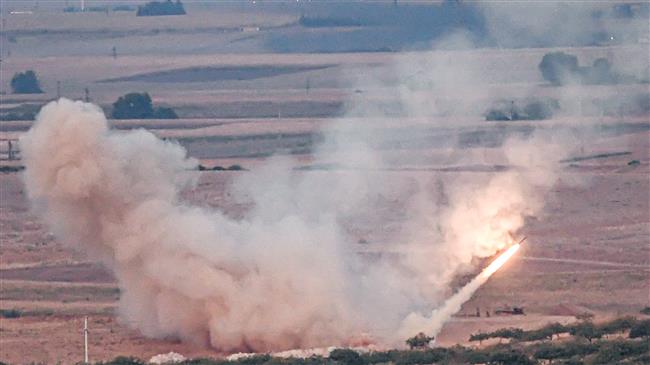 Senior Iranian and German parliamentarians have called for an end to militarism in Syria and Yemen, stressing the need for a political settlement of the conflicts wreaking havoc on the two war-torn Arab states.

Iran’s Parliament Speaker Ali Larijani held talks with Vice President of the German Parliament (Bundestag) Claudia Roth on the sidelines of the 141st assembly of the Inter-Parliamentary Union (IPU) in Belgrade on Tuesday.

During the meeting, Larijani reaffirmed Tehran’s opposition to a Turkish military offensive underway against Kurdish militants in northern Syria, saying the incursion would lead to “massacre and displacement and only make Syria’s problems more complex,” he said.

In turn, Roth voiced Germany’s “deep concerns” over Turkey’s military operation in northern Syria, warning that the incursion has already given rise to an influx of refugees into neighboring Iraq’s semi-autonomous Kurdistan region.

Reacting to Larijani’s remarks on the EU’s role, Claudia said that the 28-nation bloc has urged Russia to put pressure on Turkish President Recep Tayyip Erdogan over the incursion and sought an end to arms sales to Ankara.

She criticized Erdogan for threatening to “flood” Europe with refugees if the continent insists on constraining Ankara’s military action, adding that Iran could help resolve the refugee issue.

Claudia further highlighted the importance of political efforts to settle the crisis in Syria, saying the country’s newly formed constitutional committee needs to be empowered in order to help find a peaceful solution out of the conflict.

‘Iran ready for mediation in Yemen’

Elsewhere, the two sides exchanged views on a bloody Saudi-led war underway against Yemen as well as heightened tensions in the Persian Gulf region.

Larijani renewed the call for an end the military campaign against Yemen and said if Saudi Arabia embraces a political solution, “Iran will mediate in the Yemen issue.”

Regarding the tensions in the Persian Gulf, he said “the problem lies with other regional states,” Larijani said.

He said Iran has proposed the Hormuz Peace Endeavor (HOPE) to facilitate regional dialog and cooperation free from any foreign military presence in the Persian Gulf region.