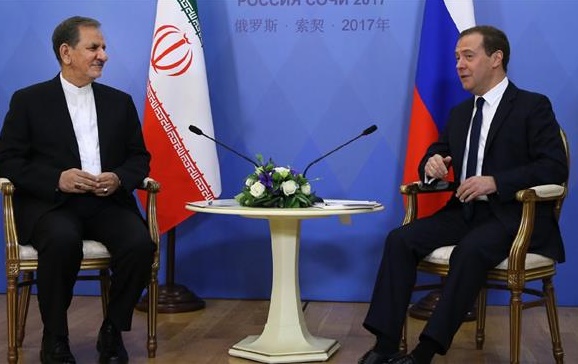 During the meeting, which took place at Sochi Olympic Park on Thursday, the two senior officials called for the expansion of Tehran-Moscow cooperation in different areas, including in the energy and economic sectors.

The two sides also discussed their countries’ joint fight against terrorism, with Jahangiri praising it “as a successful model for the world.”

Iran and Russia have been assisting the Syrian military in its counter-terrorism operations. The Iranian military advisory support and Russian aerial backup have proved fatefully instrumental in Syria’s efforts to recapture militant-held areas and end the Daesh terror group’s territorial rule in the country.

Jahangiri added that Tehran-Moscow relations are witnessing progress in all areas, especially economy, politics and culture.

Bilateral economic ties have seen a boost over the past year and a half, he added, noting, “The countries’ economic capacities can enhance the current level of commercial bilateral trade.”

The Iranian official said since the conclusion in 2015 of the nuclear deal between Iran and world countries, including Russia, Tehran-Moscow banking ties have improved.

He expressed hope that they would be able to conduct bilateral trade in their respective currencies in the future, saying, “[Potential] approaches to this [prospect] are being examined by both countries.”

He emphasized the need for the development of mutual cooperation in various areas, including oil and gas production.

Iran welcomes presence and investment by great Russian oil companies on its soil, Jahangiri said, expressing Tehran’s readiness for joint investment with Russia both in those areas as well as the pharmaceutical industry.

Medvedev, for his part, said talks with Jahangiri “is a good opportunity for exchanging information on how Russian-Iranian cooperation develops on all trajectories, including to a great degree in economic issues,” Russia’s ITAR-TASS news agency said.