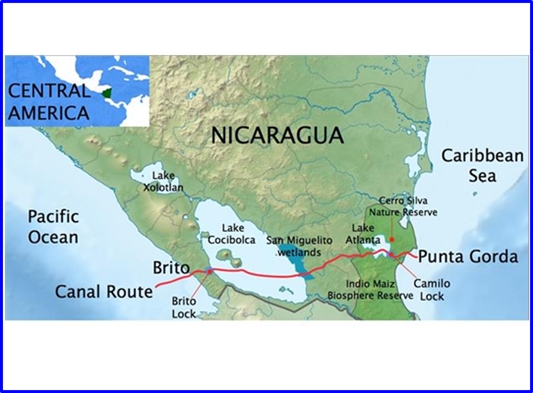 Iranian Foreign Minister Mohammad Javad Zarif says Iran is interested in a massive project to build a canal across Nicaragua which will link the Pacific and Atlantic oceans.

“Cooperation between Iran and Nicaragua can include collaboration in the construction of the [Grand] Interoceanic Canal to the areas of agriculture, energy production, petrochemistry, banking, credit, transportation, food and pharmaceutical industries, and science and technology,” Zarif noted.

Zarif visited Nicaragua on Tuesday, August 23, along with representatives of Iranian companies and discussed their possible involvement in the 50-billion-dollar project which is groomed to rival the Panama pathway.

China’s HKND group is tasked with carrying out the megaproject, with the construction about to begin at the end of this year.

At 172 miles (278 km), Interoceanic Grand Canal is over three times the length of the 100-year-old Panama Canal, which was completed by the United States 34 years after French engineers began it.

The new route is also deeper and wider than the Panama Canal, triggering a flurry of resentment from the US and its allies which have tried to cast doubt on the project and question its viability.

Moreover, China’s involvement would be a direct challenge to the United States, which controlled the Panama Canal until 1999.

Speaking in the Nicaraguan capital of Managua on Wednesday and after meeting with his counterpart Samuel Santos López, Zarif said the large politico-economic delegation accompanying him on the trip testifies to the significance that Iran attaches to ties with Nicaragua and other Latin American countries.

The Nicaraguan foreign minister, for his part, said his country had for long been awaiting a visit by the Iranian delegation.

The visit, he said, signalled that Iranian officials and enterprises were determined to expand the Islamic Republic’s already-good relations with countries in the Latin American region.

During his stay in Nicaragua, Zarif also met with René Nuñez Tellez, the head of Nicaragua’s National Assembly (Parliament), as well as the country’s President Daniel Ortega.

Zarif has travelled to the region at the head of a high-ranking politico-economic delegation comprising 120 businessmen and financial executives from government and private sectors. The tour started off in Cuba on Monday, and has now taken him to Ecuador.

Zarif is on the landmark tour of six Latin American nations to boost trade relations following the lifting of US-led sanctions on the Islamic Republic.

He started his visit in Havana where he met Cuban leaders, including President Raul Castro in what they described a new chapter in bilateral ties.

His tour of Latin American countries will further take him to Chile, Bolivia, and finally Venezuela.

More than 100 representatives of state and private companies are accompanying Zarif in the visit which also includes trips to Chile, Bolivia and Venezuela.

Iran has good relations with almost all Latin American countries, including with Nicaragua where Zarif discussed investment opportunities in a variety of areas.

Zarif told reporters aboard the flight to Cuba that promoting diplomatic and economic relations with Latin American countries is among Iran’s fundamental policies.

“The Islamic Republic of Iran has had strong and age-old relations with the Americas and Latin American states and is determined to expand its relations with and political and economic presence in this important region of the world,” he said.

Zarif said Iranian firms have implemented several projects in Latin American countries over the past few years, and Iran has diplomatic relations with nearly all the counties in the region.

In June, Venezuelan President Nicolas Maduro said the Islamic Republic had agreed to a $500 million credit line for his country to finance joint investments there.

Iran’s main industrial projects in Venezuela include a car assembly plant, a tractor manufacturing complex and a cement factory. It has also built more than 3,000 residential housing units for less privileged citizens in Venezuela, with 7,000 more to be completed.

Most Latin American states and Iran have shared grievances toward the US because of Washington’s history of supporting authoritarian regimes and engineering coups in those countries and pressuring them through sanctions and other means.

On Monday, Zarif was told in Cuba that US sanctions on the Latin American country and Iran have opened a common ground for the two countries to forge special trade ties.

“Both Cuba and Iran have reached a roadmap after years of sanctions which they should use to explore new economic opportunities and take advantage of each other’s capabilities,” Cuban Minister of Foreign Trade and Foreign Investment Malmierca Diaz said, as reported by Press TV.

The first Iran-Cuba economic forum opened in Havana on Monday, with Diaz telling Iranian companies that they could become the engine of economic growth and dynamism in his country.