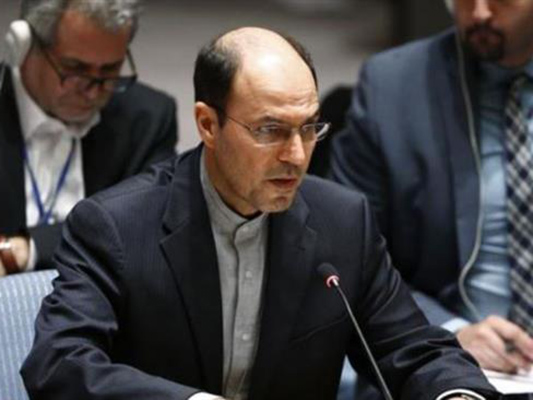 Iran’s Deputy Ambassador to the United Nations Gholam Hossein Dehqani took a swipe at a resolution drafted by Canada against Syria, saying it is unilateral and has nothing to do with "the reality on the ground” in the Arab country.

“The draft resolution on the Syrian Arab Republic, placed before us today as L.39, is a one-sided document and divorced from the reality on the ground in Syria,” Dehqani said, addressing a meeting of the UN General Assembly on Friday.

The Canadian-drafted resolution called for an “immediate” cessation of combat against militants in the Arab country. UN members on Friday voted 122 to 13 in favor of the resolution. China, Russia and Iran were three of the 13 countries that voted against it.

Following is the full text of the Iranian envoy’s statement:

Mr. President,
The draft resolution on the Syrian Arab Republic, placed before us today as L.39, is a one-sided document and divorced from the reality on the ground in Syria.

We agree that the situation in the Syrian Arab Republic has been alarming in the past several years and the humanitarian situation has been deteriorating. We also fully agree that the international community, represented by the United Nations, should do whatever in its power to address the humanitarian crisis in Syria. From the outset of the crisis, Iran, through its Red Crescent Society, has been actively engaged in humanitarian operations in Syria. Iran, bearing in mind its moral and international commitments, will continue to assist Syrians in need for humanitarian assistance. However, it is evident that this crisis is only the effect, and the draft is totally silent on its root cause.  It is an established fact that terrorism and violent extremism are the root causes of the disaster, and it is the very issue that should be first and foremost addressed by the international community. Militants and terrorists that are let in Syria, mostly through lax borders, and are supported by some foreign countries, are responsible for the very difficult situation and the ongoing humanitarian disaster.

It is again an established fact that a number of armed terrorist groups, such as Daesh, Jebhat al-Nosra and Jeish al-Fath, have been in control of and active in parts of a fellow member state of this Organization and the occupation by them of some densely populated regions has exacerbated the situation. The actions of these groups have been the main source of the suffering for the civilians and have and continue to be a tremendous challenge for humanitarian operations. They have spread terror and intimidation among the population, who they have forcibly used as human shields. Such a control of territory by feckless and reckless groups, no matter where it occurs, creates major threats and can kick off humanitarian crises.

This is exactly at the core of the problem we are facing in Syria. Given this established fact, I have a question for the main sponsors of this draft resolution, and this question simply goes to the distinguished representative of the UK, who blames others for their fight against terrorism: What they would do, had parts of their own territory been occupied by similar terrorist groups? Wouldn’t they take military action to dislodge them?

To resolve the crisis in Syria, we need to put an end to terrorist activities and at the same time continue our efforts towards a comprehensive and exclusively Syrian-led and Syrian-owned political settlement, based on dialogue among Syrians without preconditions to end hostilities and reestablish peace and tranquility. These two actions should go hand in hand.

This draft resolution is totally silent on these two major, necessary actions. Thus, we will vote against this resolution.