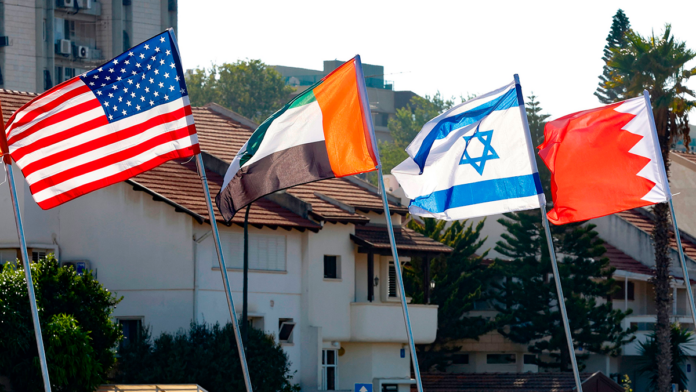 Iran’s nuclear programme and China will be at the top of the agenda of a trilateral meeting between U.S. Secretary of State Antony Blinken and his counterparts from Israel and the United Arab Emirates (UAE).

The secretary is hosting Israeli and Emirati officials in Washington to mark the one-year anniversary of the Abraham Accords, the normalization agreement orchestrated by the Donald Trump administration that established ties between Jerusalem and Abu Dhabi.

Blinken will meet separately with Israeli Foreign Minister Yair Lapid and U.A.E. Foreign Minister Sheikh Abdullah Bin Zayed Al Nahyan. Then the top diplomats will hold a trilateral meeting, during which they will announce a joint working group on religious coexistence, and water and energy issues.

Since announcing the accord to normalize relations in August 2020, Israel and the U.A.E. have established embassies in their respective countries and exchanged ambassadors, as well as signed more than a dozen bilateral agreements.

The meeting in Washington is an effort to build on the ties between the three parties. All three face pressing issues related to regional security, such as Iran, and global stability, with the U.S. focused on China’s efforts to gain a foothold in the Middle East.

“As the secretary has noted with allies and partners worldwide, we’ll be candid with our Israeli friends over risks to our shared national security interests that come with close cooperation with China,” a State Department official stated in a briefing with reporters on Tuesday.

Chinese companies have worked on and continue to bid on Israeli infrastructure projects.

Last month, a Chinese state-owned firm inaugurated its management of a port in the Israeli city of Haifa, in a project that had earlier garnered pushback from the U.S., which docks ships and runs joint naval exercises with Israel out of the sea-side city.

U.S. intelligence officials have also reportedly raised concerns that relations between the U.A.E. and China risk the security of the F-35 program, with Abu Dhabi set to take delivery of the advanced fighter jets as part of the original negotiations of the Abraham Accords.

The State Department official on Tuesday declined to highlight any specific concerns about Israel and the UAE’s relations with China.

“The U.S. views China as a competitor that challenges the existing international rules-based order,” the official said.

On Iran, the Israeli government has put forth a tempered criticism of the Joe Biden administration’s intent to rejoin the Joint Comprehensive Plan of Action (JCPOA), the 2015 nuclear agreement that established oversight of Iran’s nuclear activities.

Lapid, during his meeting Tuesday with national security adviser Jake Sullivan, discussed “the need for an alternative plan to the nuclear agreement,” according to a readout of the meeting from the Israeli embassy.

“When it comes to the trilateral meeting…  the leaders involved will discuss a range of regional issues and they will touch on this,” the State Department official noted, referring to Iran.

“And we’ll also be heavily focused on the affirmative agenda of working to realize the full benefits of normalization, and the unity of America’s partners in this region in new ways, I think will send a powerful message as well,” the official added.

In the bilateral meetings between the U.S. and U.A.E., Blinken will discuss with his counterpart efforts to achieve a ceasefire in Yemen’s war and the “shared desire” to see reforms implemented in Lebanon “to rescue the country’s deteriorating economy.”

Another point of contention is likely to arise in the U.A.E. reportedly agreeing to enhance economic cooperation with Syria.

“Our focus remains on reducing the suffering of Syrian people and working with our allies to advance a broader political solution to the conflict in which accountability for the atrocities committed by the Bashar Assad regime will be a necessary component,” the State Department official stated.