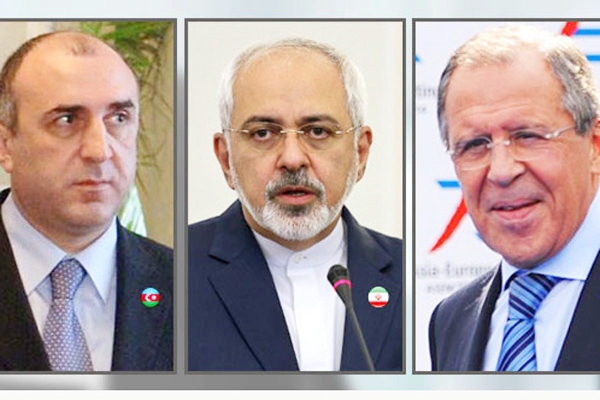 The foreign ministers of Iran, Russia, and Azerbaijan at the end of their meeting in Baku issued a statement highlighting the major areas of agreements made in the meeting.

According to the statement agreed upon by Mohammad Javad Zarif, Sergey Lavrov, and Elmar Mammadyarov, the trilateral meeting is valued as measure to deepen dialogue, interaction, and cooperation between the three countries in the region and the globe.

Also the statement stresses on the commitment of the three countries to the charter of the United Nations and all other international regulations.

The three FMs also underline the importance of staging collaborative measures against new-born threats, like terrorism, extremism, organized crimes, and drug trafficking, against the peace and stability of the region and the whole world and voiced readiness to have closer interactions in fight with them.

Agreement upon developing trilateral cooperation in areas of energy, economy, transit, infrastructures, culture, tourism, trade, costume, and consular affairs is another article of the statement.

The statement also stresses on the necessity of developing economic and trade interactions based on the principles of equality and reciprocal benefit.

Continuing efforts for keeping the Caspian Sea as a sea of friendship and peace is also stressed upon in the statement added by cal for defining a legal regime for the shared closed water.

Also the three top diplomats agreed to facilitate the way for having trilateral meeting of the presidents of the three countries.