Iran, Azerbaijan call for stronger cooperation in all areas 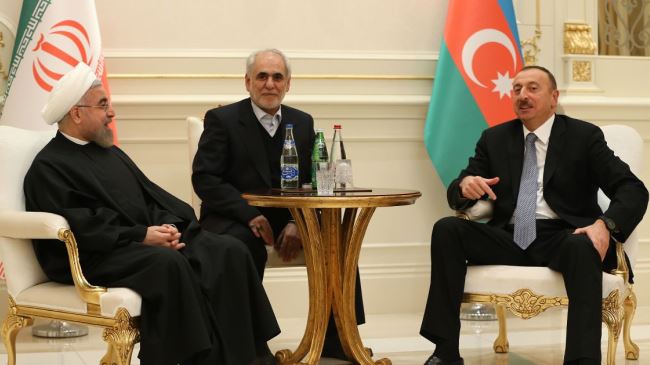 Iranian President Hassan Rouhani and his Azerbaijani counterpart, Ilham Aliyev, have underscored the need for further expansion of cooperation between Tehran and Baku in different domains.

In a meeting with Aliyev in the Azeri capital city of Baku on Wednesday, Rouhani said the Islamic Republic of Iran and the neighboring Republic of Azerbaijan enjoy great potential for expansion of bilateral cooperation.

The two countries are blessed with abundant capacities in economic, cultural, political and international fields that must be taken advantage of, he added.

Rouhani also expressed hope that all subjects of mutual interest would be discussed with Azeri officials during his two-day stay in Baku.

Upon his arrival at Heydar Aliyev International Airport in Baku on Wednesday, Rouhani told reporters that he hopes to sign agreements and explore avenues for the improvement of Tehran-Baku relations during his visit to the Republic of Azerbaijan.

“The Republic of Azerbaijan is a very good neighbor for the Islamic Republic of Iran and today, our relations are better than previous years,” he said.

On September 29, Rouhani said Tehran and Baku have great potential for the expansion of bilateral cooperation, particularly in the fields of energy, commerce, environment and tourism, adding that Iran-Azerbaijan Joint Economic Commission should play a more active role in this regard.