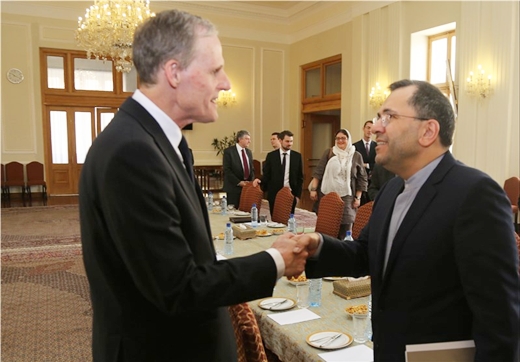 Diplomats from the Foreign Ministries of Iran and France held the first round of political talks in Tehran, in line with a memorandum of understanding that the two countries signed during Iranian President Hassan Rouhani’s visit to Paris back in January.

This first round of political talks, launched on Monday, was held at the level of deputy foreign ministers.

During the talks, Takht Ravanchi voiced Iran’s readiness to cooperate with France in diverse fields of foreign policy, and on regional issues.

He also pointed to the Joint Comprehensive Plan of Action (JCPOA), a lasting nuclear deal between Iran and the Group 5+1 (Russia, China, the US, Britain, France and Germany), calling on the other side to honour commitments to the accord to see its tangible results.

For his part, the visiting French diplomat said France favours enhanced relations with Iran, given its rich history and regional influence.

Referring to France’s familiarity with Iran’s views on the regional crises, Masset stressed the need for cooperation between Paris and Tehran to tackle regional problems, such as the fight against terrorism.

According to an agreement signed in January, the Foreign Ministries of Iran and France are scheduled to hold regular political negotiations.