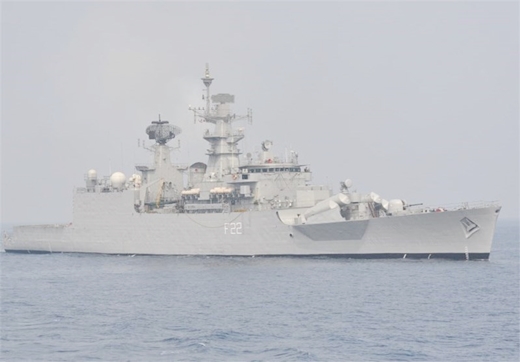 Two Indian frigates berthed at Iran’s southern port city of Bandar Abbas to pay an official visit to the strategic city in line with efforts to boost security cooperation between Tehran and New Delhi.

The Indian naval fleet, comprising INS Ganga (F22), a Godavari-class guided-missile frigate, and INS Trikand (F51), a Talwar-class frigate of the Indian Navy, were officially received by the Iranian Navy in Bandar Abbas on Tuesday.

Speaking at the welcome ceremony for the Indian fleet, Commander of Iran’s First Naval Zone Admiral Amir Hossein Azad said its visit to Bandar Abbas and the naval zone will last for four days.

He further announced that the Indian fleet plans to hold a joint drill with the Iranian Navy during a visit to the First Naval Zone.

During his stay in Iran, Modi met with Leader of the Islamic Revolution Ayatollah Seyyed Ali Khamenei and President Hassan Rouhani, and attended a ceremony in which a trilateral agreement was signed by Iran, India and Afghanistan on the development of the southeastern Iranian port city of Chabahar.