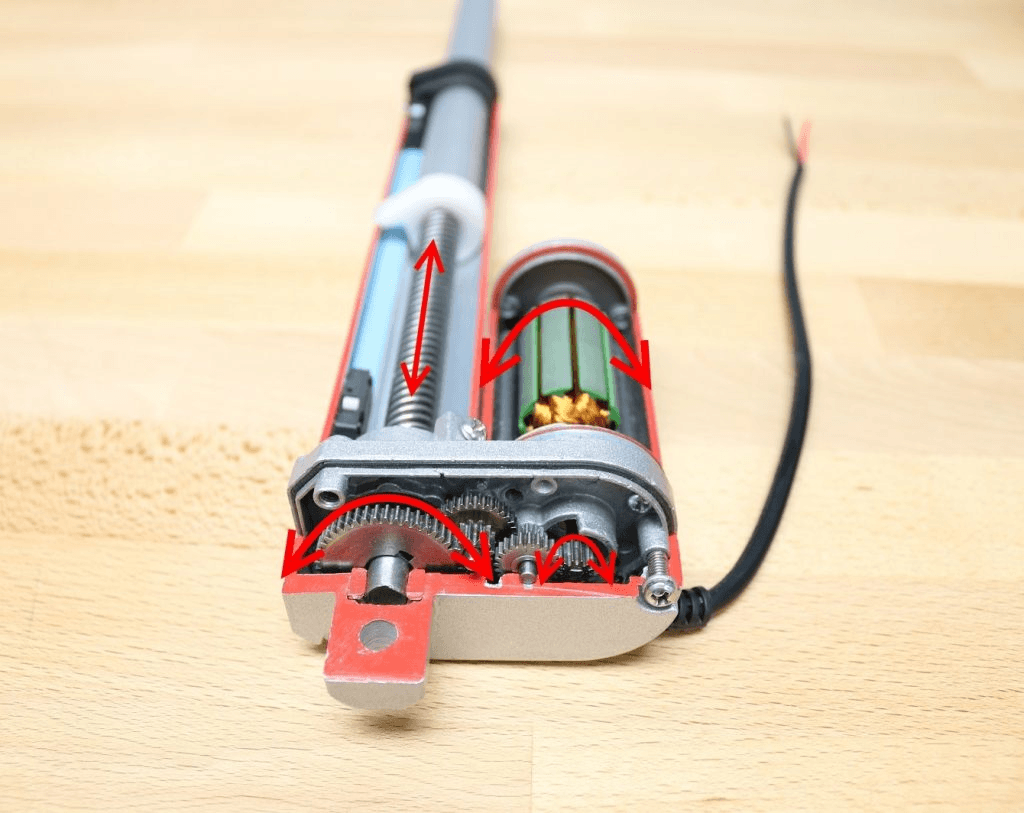 To understand how do linear actuators work it is essential first to learn the inner construction peculiarities of the chosen mechanism.

Being one of the most frequently implemented in the modern mechanical industry mechanism to produce the linear motion, the electric linear actuator has a number of main components without which it would be impossible to produce and transform energy into any kind of motion. These spare parts are Motor, lead screw, acme drill nut, gearbox.

Some linear actuators also have built-in end travel limit switches, which prevent the actuator from retraction and extension to unnecessary redundant extent.

The electric motor is the heart of the electric linear actuator working principle. When working it produces the rotational motion later transformed into the linear motion. But how does it all work? The mechanism is quite simple. The gearbox connected to the electric motor reduces its rotational motion. Only a few of such gears meshed together are capable to increase the torque and thus produce much faster and better energy conversion efficiency to turn the lead-screw.

However, the role of the toothed parts meshed together is not only of increasing the speed of movement or transmitting the torque. There are also cases when the gearbox has the reduction ratio “100=1” to, on contrary, to decrease the motor’s speed. In such kind of the electric linear actuators, 100 rotations of its motor will produce just a single rotation of its lead-screw.

The function of the built-in end travel switches also cannot be underestimated. These small parts are capable to prevent the linear actuator from unreasonably fast breakage. Before this element was introduced to the inner construction design of the electric linear actuators they were tempted to exceed its physical movement limits and it often caused to the breakage of the motor.

How does linear actuator work under different conditions? A tricky question. However also can be answered quite simply. Some kinds of linear actuators are created solely for lifting, some of them, on contrary only for pulling the heavyweight. One of the brightest examples of such kind of actuators is a jack-screw actuator quite familiar for engineers and mechanics who definitely saw it more than just once. The lead-screw and the hydraulic cylinder to which it is placed both can be made for only pulling, lifting or even for both directions for generating force depending from the customer’s needs.

Thanks to its non-complicated inner construction electric linear actuators may be dense or bulky, pull or lift the heaviest or the most aerial small weights. Their work is possible due to the process of the energy transformation. The rotary motion of the motor transforms into the linear motion, the power and speed of which, in fact, can be calculated due to a simple construction of electric linear actuators.