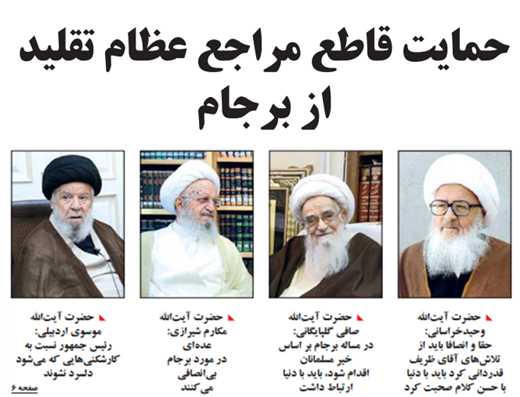 In separate meetings with Iran’s Health Minister Seyed Hassan Qazizadeh Hashemi held on Thursday in the holy city of Qom, several Grand Ayatollahs and senior clerics threw their weight behind the efforts made by President Hassan Rouhani’s administration in clinching the recent nuclear deal with world powers (known as JCPOA), and slammed the unfair treatment of the “national” issue.

He underlined the significance of “talking to the world in a proper way”, and stressed that it is a religious order emphasized by Islam.

Grand Ayatollah Lotfollah Safi Golpayegani also pointed to the JCPOA, and urged the government to do what is in the interest of Muslims.

“At the same time, we should have interaction and connection with the world,” he added.

Grand Ayatollah Abdul-Karim Mousavi Ardebili asked the health minister to urge President Rouhani not to get disappointed by the troubles made for JCPOA implementation and seriously pursue the resolution of people’s problems.

Meanwhile, Grand Ayatollah Nasser Makarem Shirazi expressed surprise that even though Ayatollah Seyed Ali Khamenei, the Leader of the Islamic Revolution, has agreed about the JCPOA, some people, claiming to be his followers, consider the deal a treason, and are opposed to it.

“Some are really unfair towards the JCPOA. The fact is that it is now done, and we should not forget that the other side is a sly one, and gives concessions little by little. It does not want us to have power in the region, and thus do not tolerate Iran’s presence as a strong country,” he added.

Qazizadeh Hashemi, for his part, told the Qom-based Grand Ayatollahs that the JCPOA is a good opportunity to settle the country’s problems. “We should tap into the chance,” he noted.