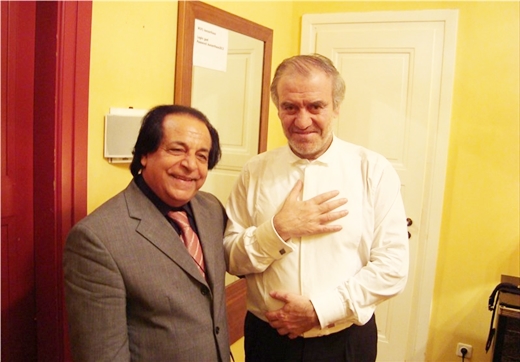 As reported by Tasnim, and translated by IFP, Valery Gergiev, the world-renowned conductor who is directly supported by Vladimir Putin, officially invited Ali Rahbari to conduct the St. Petersburg Orchestra in the Mariinsky Opera Hall. Rahbari has accepted the invitation, and the dates for this event will be announced soon.

63-year-old Valery Gergiev, conductor and Artistic Director of the White Nights Festival in St. Petersburg, knows Ali Rahbari from many years ago, when Rahbari was the conductor of the Berlin Philharmonic Orchestra, and was also an assistant of Herbert Von Karajan, the well-known conductor.

Gergiev has invited Ali Rahbari to conduct St. Petersburg’s orchestra for the last two years, but now this invitation has been accepted.

This collaboration will play an important role in highlighting Iranian artists.

The Mariinsky Theatre is the biggest hall in the world, and is managed and directed by Gergiev. Currently, the Stravinsky Orchestra has 350 players. This hall has three large orchestras. Stravinsky Hall was opened in 1860 and became a significant performance space for glorious performances by notable late 19th Century composers such as Tchaikovsky, Mussorgsky and Rimsky-Korsakov. Today, the Mariinsky Orchestra, Opera and Ballet are all world-famous, and only significant conductors are invited to lead them.