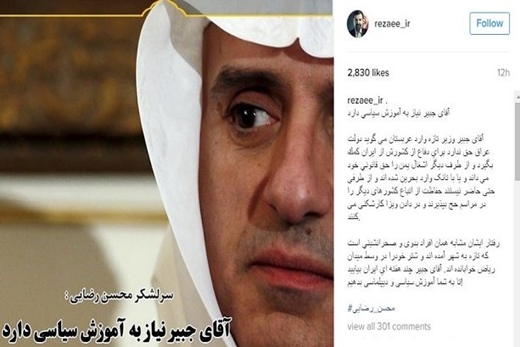 In an Instagram post on Sunday May 29, Secretary of the Expediency Council and former IRGC Major General Mohsen Rezaei leveled outspoken criticism against Saudi Arabian Foreign Minister Adel Al-Jubeir for his “crass” and “far from diplomatic” comments made in a press conference earlier that day, and suggested he make a trip to Iran to learn proper diplomatic conduct. “Mr. Jubeir, the novice Saudi Arabian minister, says the Iraqi government has no right to ask Iran for help in defending their country,” wrote Rezaei in his post, “On the other hand, he considers the occupation of Yemen his country’s legal right, or transgression into Bahraini territories with tanks. They are not even willing to protect the lives of foreign nationals during the Hajj rituals, and are completely uncooperative in issuing visas.” Rezaei went on to add, “His attitude is similar to that of Bedouin people who have just arrived in the city and laid down their camels in the middle of Riyadh square.” The Iranian official then added in jest, “Mr. Jubeir, I invite you to come to Iran for a few weeks so that we could teach you proper diplomacy!”