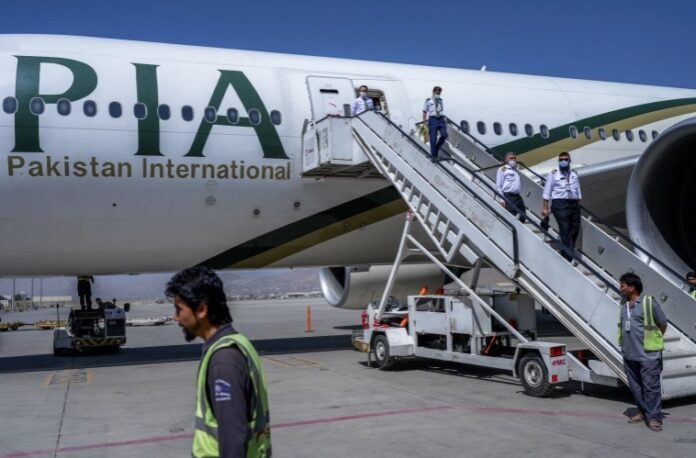 A Pakistan International Airlines (PIA) plane touched down at Kabul airport, the first international commercial flight to land in the Afghan capital since the Taliban retook power in the country in mid-August.

The Pakistani state airline flight from Islamabad carrying a handful of passengers landed at the Kabul airport, which was severely damaged during a chaotic evacuation of more than 120,000 people ahead of the August 31 deadline for US withdrawal from Afghanistan.

There was hardly anyone on the plane, around 10 people… maybe more staff than passengers, according to reports.

Hours later, the plane made a return flight back to the Pakistani capital with around 70 people on board, according to airport ground staff.

The passengers on the flight to Islamabad were mostly Afghans, including relatives of staffers with international organisations such as the World Bank.

The resumption of commercial flights will be a key test for the Taliban, who have repeatedly promised to allow Afghans with the right documents to leave the country freely.

Many NATO nations admitted that they had run out of time to evacuate thousands of at-risk Afghans before the August 31 deadline, which was agreed between the US and the Taliban.

A PIA spokesman stated over the weekend that the airline was keen to resume regular commercial services, but it was too soon to say how frequently flights between the two capitals would operate.

“This is a big moment. We are very excited,” said one airport employee, dressed in a blue shalwar kameez and orange high-visibility vest, adding, “It’s a hopeful day. Maybe other airlines will see this and decide to come back.”

A bus painted with a “Welcome to Afghanistan” was waiting to ferry the passengers from the plane to the terminal, but in the end the new arrivals walked.

Passenger halls, airbridges and technical infrastructure were badly damaged in the days after the Taliban rolled into Kabul on August 15, when thousands of people stormed the airport in the hope of fleeing.

Tens of thousands of Afghans fear reprisals for helping foreign powers during the 20-year US-led occupation, but the Taliban insist they have granted a general amnesty to everyone – including the security forces they fought against.

While the Taliban have promised a milder form of rule this time, the hardline group has moved swiftly to crush dissent, including firing in the air to disperse recent protests by women calling for the right to education and work.

Restrictions on female university students include compulsory hijabs although Haqqani did not specify if this meant compulsory headscarves or also compulsory face coverings.

Gender segregation will also be enforced, he noted.

Haqqani stated the subjects being taught would also be reviewed. While he did not elaborate, he said he wanted graduates of Afghanistan’s universities to be competitive with university graduates in the region and the rest of the world.

In an interview on Afghanistan’s leading Tolo News, Taliban Spokesman Syed Zekrullah Hashmi stated last week that women should give birth and raise children. While the Taliban have not ruled out the eventual participation of women in government, the spokesman added “it’s not necessary that women be in the cabinet”.

Sources: FRANCE 24, AFP and The AP