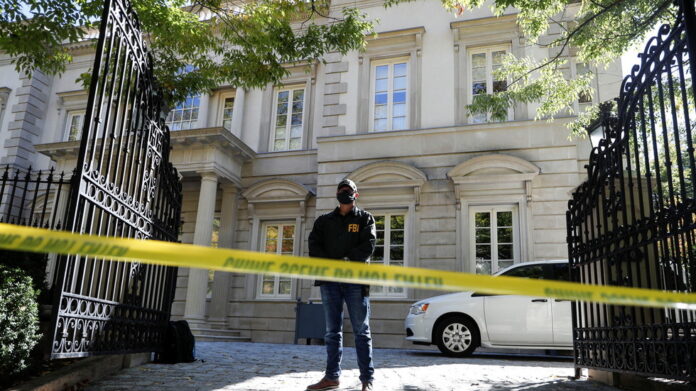 The FBI agents have swarmed a home linked to sanctioned Russian businessman Oleg Deripaska in Washington D.C. with a court order. Deripaska is known as a proxy for Russian government

Footage posted by NBC correspondent Laura Strickler from outside the palatial residence, who described it as “home of Russian oligarch Oleg Deripaska,” despite the billionaire apparently not living there, shows officers wearing masks and FBI windbreakers standing guard at the perimeter.

Deripaska’s representative on Tuesday confirmed that the property in Washington, DC, as well as one other in New York, were being searched, adding that it was related to the US sanctions. However, neither property belongs to Deripaska personally but to relatives, the spokesperson added.

The FBI initially refused to comment on the ongoing raid to reporters at the scene, but later confirmed to RIA Novosti that the DC property was being searched based on a court order.

In 2018, Deripaska was targeted by US Treasury Department sanctions, after officials claimed he’d acted as a proxy for Russian government officials. The wealth of the RUSAL aluminum empire’s founder is estimated by Forbes at $4.9 billion.

Deripaska, whose lawyer said he was a “victim” of the “general hysteria” around the events of Russiagate, attempted to sue the US government over the sanctions, but the case was dismissed by a federal court judge.

“The effect of these unlawful actions has been the wholesale devastation of Deripaska’s wealth, reputation, and economic livelihood,” the tycoon’s attorney wrote in the 28-page lawsuit.

The US has accused Deripaska of money laundering, extortion, racketeering and “illegally wiretapping a government official.”

NBC News claim he was also repeatedly denied a US visa “over his alleged ties to organized crime.”

Sputnik reported the FBI agents, after hours of searches, left the house.