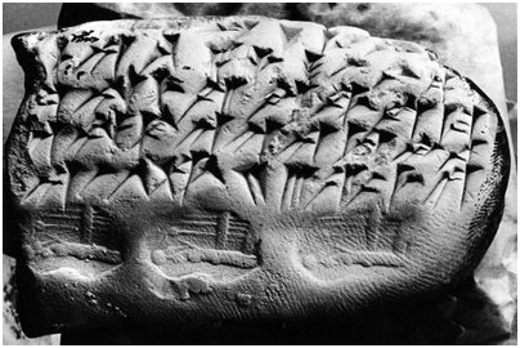 The archeological excavations in southern province of Hormozgan produced a pottery piece engraved with early orthography and an ancient stamp dating back to the 3rd millennium BC.

Director General of Cultural Heritage and Tourism of Hormozgan has announced the discovery of a pottery piece with early orthography on it, and the first discovered ancient stamp in the province.

The recent archeological excavations in a historical site in Hormozgan Province in south of Iran have led to the discovery of an ancient pottery piece engraved with early orthography and a stamp used by individuals in trade exchanges.

Abbas Norouzi told Mehr News that the piece of pottery with early orthography on it dates back to 5,000 years ago.

“The piece was unearthed in an area between Kamiz Village and Kheirabad Village in Roudan; the initial studies have confirmed that the orthography belongs to the Elamite period, approximately 2700 BC,” he said, noting that the piece was now in the possession of archaeologists and linguists of Iran’s Cultural Heritage Organization for further investigation.

He also referred to the discovery of an ancient stamp in Hormozgan belonging to the third millennium BC. According to Norouzi, the stamp was used in trade transactions and sealing.

An unearthed human skull during the excavations has marks of a surgical operation on it. According to Norouzi, the skull dates back to some 5,000 years ago. There are two holes on the skull indicating surgery performed on the brain. Earlier instances of such brain surgeries have already been discovered in Egypt as well as Shahr-e Sukhteh (the Burnt City), an archaeological site located in Sistan and Baluchistan Province, in southeastern Iran.