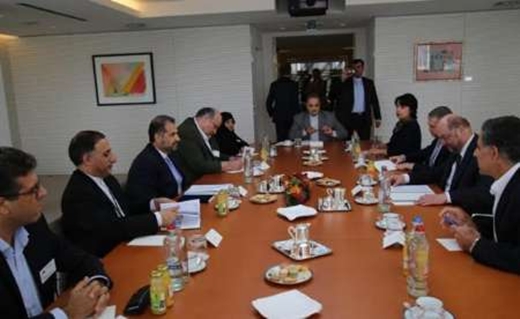 President of the European Parliament (EP) Martin Schulz said the European Union (EU) is interested in increasing its ties with Iran and that Tehran’s role in settlement of regional crises cannot be ignored.

He made the remarks in Brussels during a joint parliamentary session between EP and a visiting delegation of Iranian lawmakers headed by Chairman of EP Relations Committee Kazem Jalali, said a press release issued by the Research Center of Islamic Legislative Assembly (Majlis).

Referring to Iran’s historical contribution to the global civilization, he said the European Union is interested to set up a representative office in Tehran.

Schultz welcomed expansion of ties in the field of parliamentary diplomacy and supported the ongoing nuclear negotiations between Iran and P5+1, saying he is hopeful of reaching a final agreement which he called a giant historical step.

The ranking European lawmaker also expressed his satisfaction over the invitation of Iran’s parliament speaker to visit Tehran and said he would plan the visit in shortest possible time.

Jalali, for his part, briefed the EP side on the latest developments in the Middle East including Yemen, Iraq and Syria.

Referring to the common interests between Tehran and the EU, he said that Iran is the best scenario for diversifying Europe’s energy sources. “Europe has no alternative but to approach Iran as the world’s largest owner of gas resources.”

He also expressed Iran’s seriousness and commitment in the nuclear talks and said, “The current round of talks has its ill-wishers inside and outside the regions which requires prudence of the Western side.”

The Iranian lawmaker criticized recent statements by French President Francois Hollande while visiting Saudi Arabia and added they were not in conformity with the EU and P5+1 approach.

In his capacity of member of the parliament’s National Security and Foreign Policy Committee, Jalali elaborated on Iran’s heavy human and financial losses in fighting narcotic trafficking from Afghanistan to European countries.

He said IS terrorist group is recruiting members from Al-Qaeda in Afghanistan and plans to use narcotic trade in order to achieve its targets.

On the Saudi-led aggression on Yemen, he said the crisis was ignited amid inter-Yemeni negotiations which were interrupted by the Saudi intervention.

Saudi Arabia could contribute to the political settlement of the Yemen issue, he added, but it has turned to the major problem by killing civilians and destroying their infrastructure.