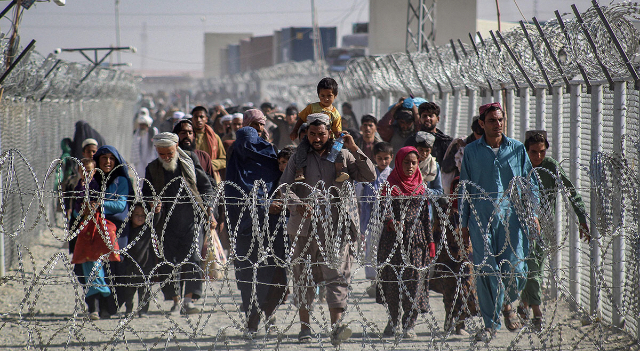 Iran’s Ambassador and Permanent Representative to the United Nations (UN) Majid Takht Ravanchi has announced the country is hosting Afghans with “almost no new resources from the international community”, while Tehran is under US sanctions.

Takht Ravanchi has urged the international community to assist Afghan people to stand with honor and dignity.

“The international community has a moral responsibility to assist the Afghan people to stand on their own feet with honor and dignity,” he stated in his op-ed published by local media.

The full text of the Iranian envoy’s op-ed is as follows:

This Wednesday, the foreign ministers of Afghanistan’s immediate neighbors plus Russia gather in Tehran to assess the current calamitous situation in that country. They meet to discuss the possible ways and means of assisting the people of Afghanistan in overcoming the difficult and horrific challenges facing them.

Following the hasty US withdrawal and the sudden collapse of former President Ashraf Ghani’s government last August — and the takeover of the entire country by the Taliban — rapid developments have taken place which has brought about serious political, economic, social and security ramifications for the entire region.

As a neighboring country that enjoys historical, cultural, linguistic, and religious bonds with Afghanistan, the Islamic Republic of Iran cannot remain indifferent to the plight of the Afghan people. During the last 42 years, Iran has used its good offices to bring Afghan factions — many with different ethnic and religious backgrounds — together to resolve their differences peacefully. For years, we have also been providing humanitarian assistance to more than three million Afghan refugees with practically little international support. The recent developments in Afghanistan have now meant that another few hundred thousand refugees have crossed the border into Iran. And again, we are hosting our Afghan brothers and sisters with almost no new resources from the international community. Besides food, shelter, medicine and education, we are now also providing the refugees with COVID-19 vaccines — all while we are under draconian and illegal US sanctions.

The current situation in Afghanistan requires a concerted international effort, and its neighboring countries can play a big role in this regard. We believe a regional approach — with the support of the UN — can help the Afghan people overcome the current crisis. We have supported a 6+2 format (neighboring countries plus Russia and the US) under the UN umbrella, and we are now hosting a meeting of Afghanistan’s neighbors.

With these efforts, there are a number of issues that require urgent attention:

1) The absolute necessity of the establishment of an inclusive government in Afghanistan. The domination of one ethnic or religious group over the entire country is doomed to fail. Afghanistan is a multi-ethnic country and a government representing all Afghans must be formed in order to gain the trust of the people of Afghanistan as well as the respect of the international community.

2) Current efforts to provide humanitarian assistance to the Afghan people should be redoubled. Winter is approaching and the humanitarian needs of the people are becoming dire. As such, the provision of assistance should not be contingent on other issues. For our part, we have intensified our efforts in this regard and will continue to do so.

3) An international response to the flow of refugees into neighboring countries—including Iran—needs to be intensified. It is incumbent upon the international community, and particularly the Western countries, to pay their fair share in providing assistance for the refugees.

4) During recent years, the Afghan people, including women who represent half of the population, have made great progress in the advancement of their country. These achievements should not be allowed to be rolled back. Based on Islamic teachings, the human rights of all Afghans, women, men, and children alike, from different religious and ethnic backgrounds, must be respected.

5) Terrorism must be confronted with full vigor. Terrorist groups, including Daesh, should not be allowed to take advantage of the present situation in Afghanistan to cause havoc and terrorize the population. The recent terrorist attacks in Kunduz and Kandahar are alarming and should serve to remind us of the continuous threats terrorists pose to Afghanistan and its neighborhood.

The US invasion and occupation of Afghanistan — lasting 20 years — in which many Afghans were killed by US forces, and the subsequent irresponsible withdrawal of US and NATO forces has created a dangerous situation in a turbulent region. The international community has a moral responsibility to assist the Afghan people to stand on their own feet with honor and dignity.

Equally important, the people have a historical responsibility to put aside their differences and establish an inclusive and broad-based government with the participation of all ethnic and religious groups. This can only be achieved through intra-Afghan dialogue and absent foreign interference.

It is high time for the international community to join forces to expeditiously help the Afghan people. We in Iran are doing our part. The alternative — not just for Afghans but for all of us — can only be a disaster.