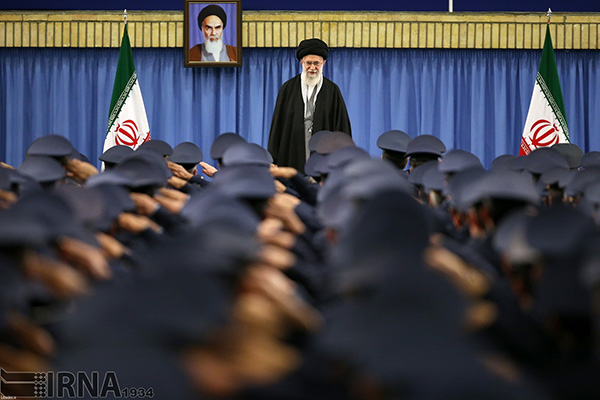 Leader of the Islamic Revolution Ayatollah Seyyed Ali Khamenei says the top world powers have opposed the Islamic Republic since its inception but have failed to achieve any of their objectives.

“Since the first day of the [1979] Revolution until today, the number one materialistic powers in the world have stood against the Islamic establishment but have failed to make any headway in this regard,” the Leader said in a meeting with the commanders and staff of the Islamic Republic of Iran Air Force on Monday.

Ayatollah Khamenei further urged Iranian officials to remain vigilant at all times against the plots targeting the country. “Be careful about what lies behind enemy smiles,” the Leader said.

Ayatollah Khamenei ridiculed the US proclamations of advocating human rights and democracy, saying Washington has thrown its weight behind the Israeli regime, which murders children, and its allies in the region, which are strangers to the concept of elections.

“The Americans refuse to respond to the simplest questions in the world public opinion about their support for the elements behind the savage crimes in Yemen and flagrantly continue to back those who are carrying out the most merciless form of state terrorism in massacring the innocent people of Yemen,” the Leader said.

Elsewhere in his remarks, the Leader pointed to the upcoming parliamentary and the Assembly of Experts elections and said participating in the February 26 votes is a “duty” for all the Iranians.

Mass popular turnout in the elections will thwart enemy plots and “guarantee the dignity and might of Iran and the establishment” by injecting “fresh blood” into the country.

The Leader praised Iranians’ participation in annual rallies marking the victory of the Islamic Revolution, urging a massive presence in the upcoming demonstration. Ayatollah Khamenei said that impressive participation in this year’s rallies will also frustrate ill-wishers.

Ayatollah Khamenei said all of the enemy efforts are directed at preventing the movement of the Islamic Republic toward dignified and mighty goals and reinstating the domination of foreigners over the country.

“Today the main agenda to counter the Islamic establishment is [to wage] a soft war to deplete the Iranian people and establishment of the components of power,” the Leader said.

The Leader said there is a “hostile front” against Iran in economy, culture and social issues, stressing that “whenever enemy cannot continue its hostility, it deals its blows [to our country] in the guise of a friend.”