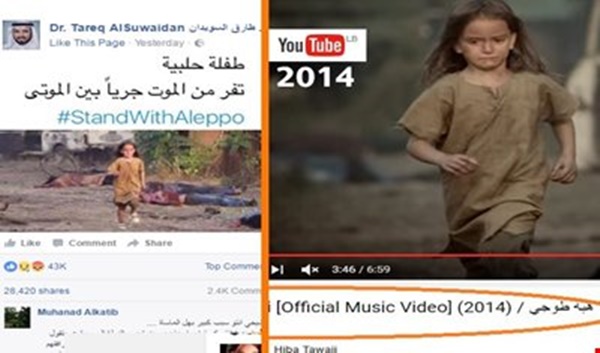 The Egyptian police have captured five people for using children to stage fake footage they claimed was shot in Aleppo.

According to a report by IFP, the videographer, two assistants and the parents of two children who appear in the footage were detained by officers, the Egyptian Interior Ministry said.

The very amateur-looking footage shows an eight-year-old girl wearing a white dress and bandages, and clutching a teddy bear, all of which are covered in bright red stains.

A 12-year-old boy is also interviewed on the film, in which he is questioned about what life is like in the besieged city.

The raw videos and stills were released by the Interior Ministry alongside a statement on Facebook, which said a camera and six mobile phones had been seized at the scene.

The group had allegedly planned to share the footage on social media, and claim that it was shot in Aleppo.

The northern Syrian city has been caught up in four years of fighting between the regime and Sunni rebels, Mirror reported.

The group initially attracted the attention of police after officers spotted the girl’s stained dress, and cops swooped after trailing them to building site, where they made the arrests.

Syrian activists and volunteer rescue workers the White Helmets have often been accused by critics of posting fake footage that claimed to show the aftermath of Russian-backed government bombing raids in militant-held eastern Aleppo.