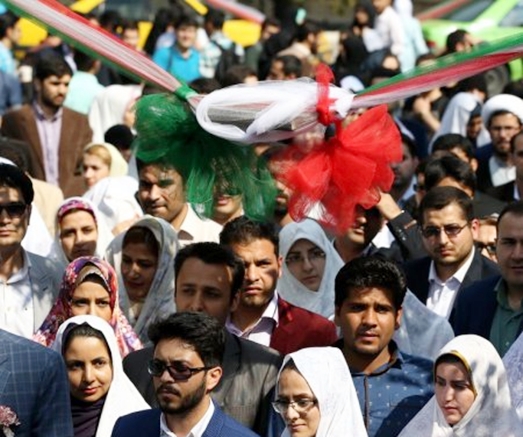 Iranian men and women are marrying later than ever before. Data from the National Organization for Civil Registration (NOCR) shows that women are now getting married at 27.2 years and men at 31 years, on average. This is a large increase on previous figures, which were 23.8 for women and 28.5 for men.

On the sidelines of the National Population Day ceremony last month, Seyed Alireza Avaee, Deputy Interior Minister and head of the NOCR, said, “In the past few years, the median age of first marriage has risen significantly in both men and women; however the increase has been dramatic in women.” Stating that the record for adults who have never been married is also high, he pointed out that currently, there are 11 million singles in the country and “many of them have crossed the marriage median age,” the Persian-language weekly Tejarat-e-Farda reported.
He stressed the need for the development of programs for encouraging and supporting healthy marriages and said “economic hardship isn’t the only culprit” for the problem. Cultural issues are also at play.
According to the latest United Nations study, since the year 1980 the marriage average age has increased by 6 years globally. The main reason cited for this increase is that people spend more time on higher education and achieving better living standards, therefore postpone getting married.

Non-Economic Reasons
In an interview with Tejarat-e-Farda, sociologist Afsar Afshar-Naderi said tough economic conditions are said to be the main reason for delayed marriages, but in reality they are not. “So far, several measures have been taken by the government to encourage the youth to marry young. Unfortunately, many of them are simply hopeless, if not harmful.”
“In the past, wedding ceremonies and traditions were beautiful dreams for every girl and boy. Holding mass wedding ceremonies for a large number of university students has ruined that dream and the nuptials,” she said.
“It is the worst measure that could be undertaken in order to make marriage attractive to youth.” To facilitate marriage for Iranian youth, “we shouldn’t simplify the customs which can devalue marriage. Instead we need to empower young people, and simplify their lives by creating jobs,” for the army of unemployed.
Although this is not the only reason for lack of willingness to marry, it is definitely one of the reasons that have belittled marriage in the minds of young people. The other is the changes to the family law. In July 2007, during the presidency of Mahmoud Ahmadinejad (2005-2013), the ‘Family Protection Bill’ was devised and approved by the government and sent to parliament for approval. The bill became law soon after. According to the Family Protection Law (many believe the name is a misnomer), men don’t need their wife’s permission to take a second wife. They should just provide proof that they can afford a second wife.
“When we denigrate marriage by taking such wrong actions, how can we expect the youth to value it?” she asked.

Also, many young students, both girls and boys, leave home to attend university in other cities and as a result become independent, and less inclined to enter matrimony.

Divorce Rate Up
The marriage rate has declined in the last 3½ years — down 1.9% in 2012, 5.1% in 2013, 6.7% in 2014 and 7.2% in the first months of 2015. While the number of marriages ranged between 870,000 and 890,000 from 2007 to 2011, it decreased to 820,000 in 2012 and 770,000 in 2013.
On the other hand, divorce rates have jumped by 11.5% as 69,182 cases were registered, the National Organization for Civil Registration said last September.
Marriage now is not the first priority on the list for youngsters and comes fourth after employment, education, and home ownership as per a survey conducted in 2012. “The younger generation is more concerned with improving their financial status rather than creating a home and family,” according to Shahla Kazemipour, sociologist and faculty member of Tehran University.
The average life of Iranian marriages has reduced to three years. Only 11% of Iranians have the chance to celebrate their 20th wedding anniversary.  About 6% of all divorces occur during the first year of marriage.

Unnecessary Delays
While unnecessary delays to marriage should be avoided, according to a recent study conducted by the US Marriage Health Research Center, postponing marriage to have a higher education level and better job prospects is associated with having a more successful and long-lasting marriage.
Couples who are economically secure are less likely to commit domestic violence and they can provide a better life for their children. The study showed that for the university-educated, delaying marriage has been a success, but not for others. There is also a significant relationship between divorce and the level of education. Almost 70% of male divorcees and 65% of female divorcees in Iran don’t have university education.
Married couples are considerably less likely to engage in risky behavior, such as substance abuse. They are also considerably less likely to develop severe mental illnesses, and different kinds of health complications including cardiovascular diseases.