De Mistura arrives in Iran ahead of Syria peace talks 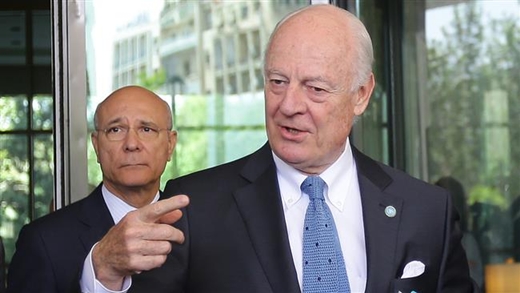 UN special envoy Staffan de Mistura is in Tehran to discuss the Syria conflict with Iranian officials ahead of the upcoming peace talks in Geneva.

The indirect talks between the Syrian government and opposition will resume in the Swiss city on April 13.

The UN envoy traveled to Damascus on Sunday and met with Syrian officials there. He said there that the upcoming round of intra-Syrian dialogue would be “crucially important.”

The last round of the UN-backed peace talks for Syria came to a halt on March 24 over disagreements on the role of President Bashar al-Assad in Syria’s future.

The foreign-backed Syrian opposition says Assad must step down before a transitional government can be established.

Last month, Syrian Foreign Minister Walid Muallem reiterated that Syria “will not talk with anyone who wants to discuss the presidency,” adding, “Bashar al-Assad is a red line.”

The West and its allies in the Middle East say Assad cannot be part of a future government in Syria. Iran and Russia insist that the Syrian people must decide on their future.

According to a February report by the Syrian Center for Policy Research, the conflict in the Arab country has claimed the lives of over 470,000 people and displaced nearly half of its pre-war population of about 23 million within or beyond its borders.