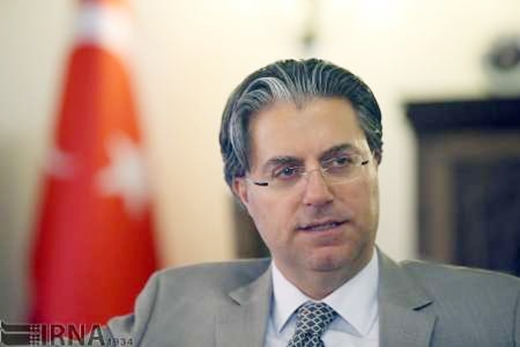 The Turkish ambassador in Tehran said on Monday May 9 that Turkish foreign policy will not be seriously affected by the resignation of Prime Minister Ahmet Davutoglu, and that such changes will not have an impact on Iran-Turkey ties.

Speaking in an exclusive interview with IRNA, Reza Hakan Tekin said that Iran is an important country and a key neighbour of Turkey, and that expanding relations with Tehran is high on Ankara’s agenda.

He said that resignation is something natural in the world of politics which happens occasionally.

The ambassador said that the Justice and Development (AKP) Party, which holds the majority in the Turkish Parliament, will elect a new secretary-general in the upcoming extraordinary congress who, he said, will probably become the next prime minister.
When asked to comment about the possible candidates for replacement of Davutoglu, Tekin said that apart from the ministers of energy and transportation, certain other speculations have been made by the media.

However he said that it is the AKP extraordinary congress on May 22 that will play a key role in choosing the next prime minister.

President Erdogan did not seem to agree with Davutoglu’s policies, which stressed avoiding tensions with neighbours and opposed military policies. When asked whether Davutoglu’s resignation would affect Turkey’s relations with neighbouring countries, the ambassador said he did not expect a major change in Turkish foreign policy.