Compassionate People and Dollars in the Street 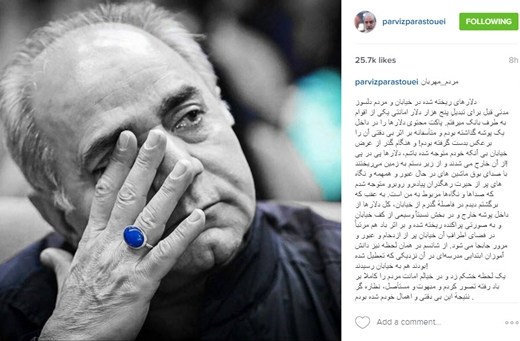 Parviz Parastouyi is one of Iran’s most famous actors, and has won several awards including Best Actor at this year’s Fajr Film Festival. In Iran, it can be a difficult job to be a famous artist without being aligned with either Reformist or Principalist causes. Parviz Parastouyi, however, seems to be an exception. He has managed to keep himself impartial while talking about the good things of both sides – perhaps this is why he has been so admired by the people as an independent character.

The following is a story shared by him on his Instagram page, narrating a story which happened to him not on the cinema screen but on a real-life Tehran street. The story has been taken from Alef News, and translated by IFP.

“Compassionate People and Dollars in the Street”

“A while ago, I was going to a bank to exchange $5,000 belonging to one of my relatives. I placed the envelope of money in the middle of a file, but unfortunately, due to my carelessness, I was holding it upside down. While I was walking across the street, the notes were falling out one by one without me noticing it.

“Hearing the sound of car horns and seeing the people’s surprised faces made me glance back. I saw that all the dollars had fallen from the envelope, and were spread over a wide area of the street – spreading even more because of the wind. At that moment, some kids on their way home from school arrived on the scene as well.

“I was shocked and couldn’t move, thinking about my relative’s money being scattered to the wind, simply stunned at the result of my carelessness.

“The voice of a young woman holding a baby in her arms, who was picking dollars up from the ground, brought me back to the present: “Why are you standing there doing nothing, come on, pick them up!”

“Unbelievably, I saw lots of people all doing what I was supposed to do. There were several people on the pavement, the kids, and some young boys and girls who were stopping the cars to let others pick up the notes.

“A few minutes later, I was surrounded by compassionate people who were stretching their arms toward me holding crumpled notes. I didn’t know whether I should take the notes from them or kneel down in front of them for their honesty.

“A shopkeeper from the other side of the street came and took me into his shop. He gave me a glass of water then went and collected more notes from people who didn’t even want to be thanked for what they’d done. We counted them. Not even a single note was missing.

“After that day, I once again came to the conclusion that a good society is not necessarily one which is guided by government. We can make it ourselves. It’s not too late!”