Commander: Any aggression to receive a crippling response 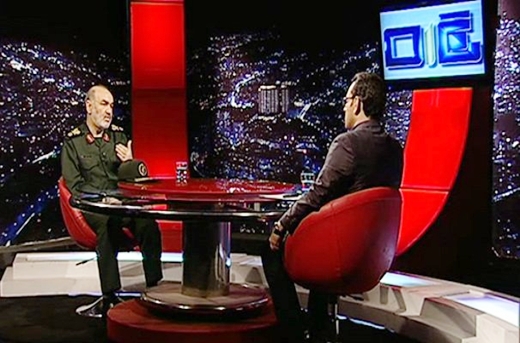 A senior military commander said Iran's armed forces will give a devastating response to any possible aggression against the country.

Deputy Commander-in-Chief of the Islamic Revolution Guards Corps (IRGC) Brigadier General Hossein Salami made the remarks in a TV program.

Elaborating on the issue of the American sailors that entered Iran’s territorial waters recently and were arrested by the IRGC forces, the commander said the issue showed Iran’s power worldwide.

‘They did not enter the Iranian waters on purpose, but such an event happened at a proper time when it was needed the big idol to be broken,’ said the commander.

The arrest of the US sailors happened just a few days before lifting of anti-Iran sanctions and announcement of the ‘Implementation Day’ on January 16.

‘While being stopped, the American crew did not resist very much, but after that a US aircraft started showing provocative behavior for 40 minutes, said he, adding the behavior was to create psychological tension.’

About two weeks ago, when the American sailors were arrested in the Iranian waters in Farsi Island in the middle of the Persian Gulf, they were treated gently, said the commander.

About the impact of the arrest of the US sailors by the IRGC naval forces, the commander said none of the world powers are able to scare Iran in the sea.

About the recent prisoner swap between Iran and US, Salami said there was no relation between the sailors’ arrest and that swap.

About removal of anti-Iran sanctions that happened after the IAEA report on nuclear verification in Iran, Salami said the US was defeated when dealing with the Iranian nation’s resistance.

In the era of sanctions, Iran could grow and achieve the greatest successes, said he.

During the past four decades, he said, the US and its partners including the Zionist regime have concentrated on the World of Islam, attacked on 14 Islamic countries and waged four big wars against the Islamic nations.

On the issue of the Saudi behavior in the region and execution of the prominent Shia cleric Sheikh Nimr by the Saudi government on January 2, the commander said the Saudi regime has unfortunately had devastating impact on the security in the Muslim nations in recent years.