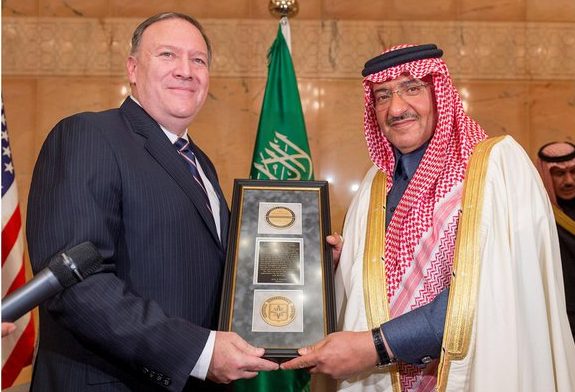 The US Central Intelligence Agency (CIA) has honored Saudi Crown Prince Mohammed bin Nayef with its prestigious “George Tenet Medal” for his "intelligence work in the fight against terrorism."

The medal was handed to Nayef, who is deputy prime minister and minister of interior, by CIA Director Micheal Pompeo on Friday during a reception ceremony in Riyadh.

In a statement after receiving the medal, Nayef said he appreciated the CIA honor and framed it as a recognition of what he called Saudi Arabia’s anti-terrorism efforts under the directives of King Salman bin Abdulaziz Al Saud.

“Saudi Arabia rejects and denounces strongly terrorism in all its forms and manifestations,” the crown prince was quoted as saying by the Saudi media.

“All negative religious, political and social ideologies that use religion as a tool throughout human history, do not reflect the absolute truth about religion,” Nayef added.

This is while Saudi Arabia, where Wahhabism is widely preached and practiced, stands accused of supporting terrorist groups fighting the Syrian government since 2011.

Daesh and other Takfiri terror groups use the extremist ideology to declare people of other faiths as “infidels” and thus to kill them.

In his statement, Nayef also underlined the importance of the “strong and historic” US-Saudi ties, saying the two sides would not allow anything or anyone to come between the allies.

Relations between Washington and Riyadh strained last year over congressional legislation seeking to make it easier for families of 9/11 victims to sue Saudi Arabia.

Fifteen of the 19 hijackers who allegedly carried out the September 11, 2001 attacks came from Saudi Arabia and available evidence suggests some of them were linked to high-ranking Saudi officials.

Saudi Arabia has been engaged in a military campaign against Yemen since March 2015 to reinstate the country’s resigned president, Abd Rabbuh Mansur Hadi, a staunch ally of Riyadh, and undermine the Houthi Ansarullah movement.

The Saudi war has killed more than 11,400 Yemenis, and taken a heavy toll on the country’s facilities and infrastructure, destroying many hospitals, schools, and factories.

The Pentagon has been providing logistic and surveillance support to the Saudi regime in the military aggression against Yemen. Riyadh has purchased billions of dollars worth of American warplanes and other weaponry that it is using in Yemen.