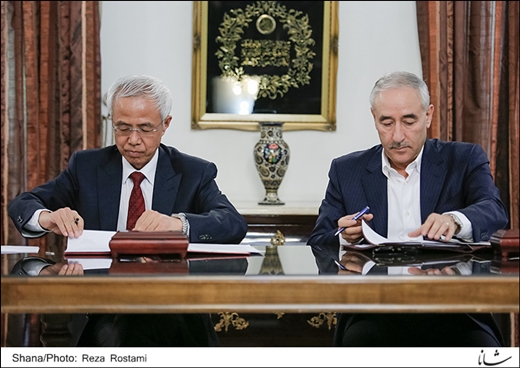 The National Energy Administration of China has signed a memorandum of understanding with the Iranian Ministry of Petroleum to support oil and gas projects in Iran, including the refurbishment of Abadan Refinery in south-western Iran.

An official with the international department of the Petroleum Ministry, Marziyeh Riahi, told Shana that the renovation of Abadan Refinery, which is over a century old, is one of the articles of the MoU signed on Sunday May 15 by Amir Hossein Zamaninia, deputy petroleum minister for international affairs and trading, from Iran and Deputy Administrator of National Energy Administration of China Zhang Yuqing from China.

“The deal will bring Iran’s share of the Chinese market up to the pre-sanctions period,” said Riahi, who is director-general of the Asia and Oceanic office of the international affairs and trading department of the ministry.

She also said that based on the MoU, Chinese partners have also agreed to invest in 70 petrochemical projects which have been pitched by Iran to foreign investors.

Construction of oil industry equipment is one of the articles of the MoU, and accredited Chinese companies can join Iranian companies to build such items for the oil, gas, refining and petrochemical industries, the official added.

Technical cooperation in international standards levels is another topic of the deal, she added, saying that the two countries will also cooperate in training human resources in this regard.

Iran and China signed this long-term deal on Sunday in Tehran.