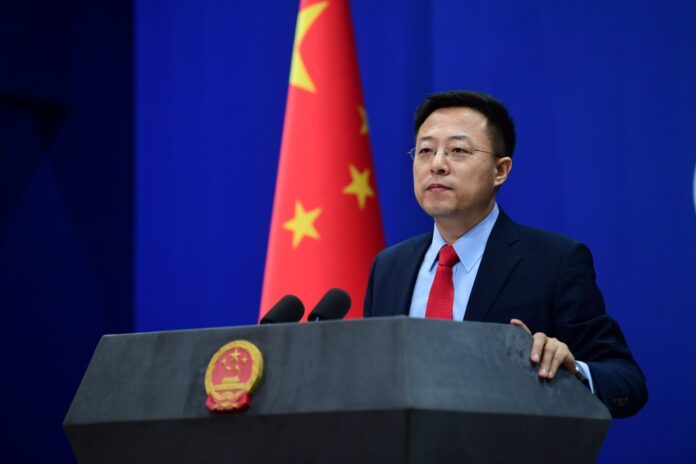 China has called on the United States to end the wrong policy of maximum pressure on Iran and to remove entire illegal sanctions against Tehran.

Zhao Lijian, the Chinese Foreign Ministry spokesperson, made the remark in response to a recent statement by Robert Malley, the US special envoy for Iran, that Washington was ready to consider “all options” to address the Iranian nuclear program and had talked to China about the sanctions.

Zhao rejected the use of sanctions and pressure against the Islamic Republic and said the full implementation of the Joint Comprehensive Plan of Action (JCPOA) was the “only effective way” to settle disputes on Iran’s nuclear program.

“China always believes that resuming the full and effective implementation of the JCPOA is the only effective way to resolve the Iranian nuclear issue. Facts have proved time and again that sanctions and pressure lead nowhere, and dialogue and consultation is the right way forward,” Zhao told reporters at the briefing.

“Iran has repeatedly reaffirmed its commitment to the JCPOA and its readiness to return to negotiations on the resumption of compliance. Relevant parties should respond to Iran’s reasonable demands by taking concrete actions, push for an early resumption of negotiations and strive for new progress,” he added.

The Chinese Foreign Ministry spokesman expressed Beijing’s opposition to anti-Iran sanctions and called on the administration of US President Joe Biden to remove the restrictive measures on Tehran and also refrain from imposing new ones.

“I would like to stress once again that as the one who caused the renewed tension on the Iranian nuclear issue, the US should correct its wrong policy of ‘maximum pressure’ on Iran, lift all illegal sanctions against Iran and measures of ‘long-arm jurisdiction’ over a third party, refrain from imposing new Iran-related sanctions and bring the JCPOA back on track at an early date,” Zhao said.

“The US is well aware of China’s position of opposing sanctions and China’s determination to firmly uphold its legitimate interests,” he added.

Iran and six world powers—the US, Russia, China, France, Britain and Germany— clinched the JCPOA in 2015. Three years later, the JCPOA was unilaterally abandoned by Washington under former US president Donal Trump and sanctions were reinstated as part of the so-called maximum pressure campaign, in spite of Tehran’s strict compliance with the multilateral accord.

Following a year of strategic patience, Iran resorted to its legal rights stipulated in Article 26 of the JCPOA, which grants a party the right to suspend its contractual commitments in case of non-compliance by other signatories, and let go of some of the restrictions imposed on its nuclear energy program.