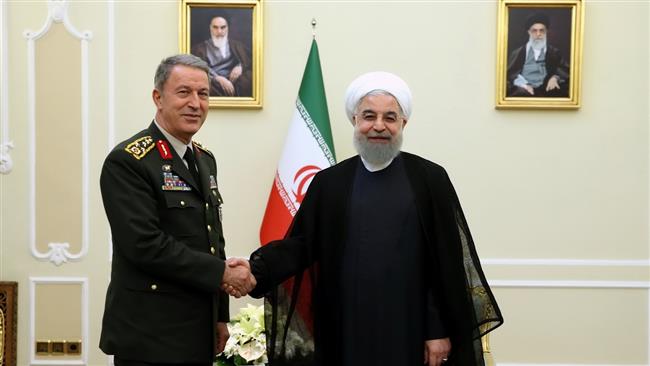 Iran's President Hassan Rouhani has stressed the need to bolster central governments in Syria and Iraq, saying that any change in geographical borders will cause insecurity and instability to spread across the region.

Rouhani made the remarks in a meeting with Turkish Chief of General Staff Hulusi Akar in Tehran on Monday.

Stressing the necessity of strengthening the central governments in Syria and Iraq in order to maintain the two countries’ territorial integrity, facilitate the war on terror and prevent alterations in geographical borders, Rouhani said, “Any change in geographical borders will cause insecurity and instability to spread throughout the region.”

He added that fighting terrorism and safeguarding geographical borders in the region were the most important goals that Iran and Turkey sought to achieve through development of cooperation and bilateral relations.

The Iranian chief executive emphasized that Iran and Turkey, as two important countries and the pillars of stability in the region, could play an influential role in resolving regional issues if they stood by each other.

Mentioning terrorism, insecurity and instability as common threats facing Iran and Turkey in the region, Rouhani said, “To do away with these threats and in line with the common interests [of the two countries], all-out relations and cooperation must further develop between Tehran and Ankara.”

“The armed forces of Iran and Turkey can establish constructive relations in order to repel regional threats through further expansion of cooperation and exchange of experience,” Rouhani pointed out.

For his part, the Turkish chief of general staff said his country respected territorial integrity of all regional countries, including Syria and Iraq, and expressed Ankara’s readiness to develop cooperation with Iran in the fight against terrorism.

Akar arrived in Tehran late Sunday at the invitation of Chief of Staff of the Iranian Armed Forces Major General Mohammad Baqeri, who visited Ankara in mid-August, the first by an Iranian chief of staff since the 1979 Islamic Revolution. The Turkish military official’s trip is taking place ahead of a scheduled visit by Turkish President Recep Tayyip Erdogan to Iran.