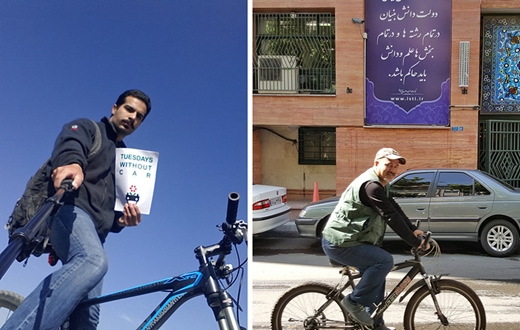 The campaign for car-free Tuesdays, which is gaining momentum across Iran, originated last November in Arak, a city overburdened by too many pollutant industries.

Entering its 22nd week this Tuesday, the campaign was kicked off by Mohammad Bakhtiari, 25, who majored in architecture and is a member of a local NGO with 1,000 members known as “The Guardians of Arak’s Environment.”

Mohammad, whom I spoke to for a phone interview while riding his bike Friday in Arak, said, “With air pollution getting worse, I didn’t want to sit back doing nothing. I thought that everybody must be responsible for this problem, and I was thinking of a way to involve more people to help with it.”

“The best way was to encourage people to rethink driving their cars. Thus, I drafted a poster for car-free Tuesdays and shared it on social media for two weeks.”

“Meanwhile, I went into the streets in Arak with the poster in hand and explained it in person to people. Within the first two weeks, a bike-riding campaign from [the city of] Rafsanjan joined the campaign. Very soon, TV Channel One presented Car-Free Tuesdays on the program My Homeland. In the fourth week, I talked to Mohammad Darvish at the Department of Environment, who supported the campaign and introduced it wherever he went.”

Before meeting Mohammad, I went to the Department of Environment to see Darvish, head of education and environmental contributions, to know more about the burgeoning campaign.

Darvish began by quoting Gustavo Petro, the mayor of Bogotá in Colombia, who had said, “A developed country is not a place where the poor have cars. It’s where the rich use public transportation.”

“70m litres of fuel are used every day in Iran, 20m of which is imported. Figures show that 15% of the traffic in Iran is unnecessary.  We are not striving for an overly idealistic condition at all. We will be successful if we can cut that 20m litres of imported petrol by stopping these unnecessary journeys.”

Tuesday was chosen because it is in the middle of the Iranian week, when traffic congestion is high and air pollution at its peak, Darvish explained, adding, “If we succeed in bringing Tuesday traffic under control, we will be able to see its impact throughout the week.”

A total of 600 weeks have been planned for the movement to be internalized in Iranian society, and the first 100 weeks are set to raise people’s awareness about it, Darvish explained.

Darvish went on to say that “Government must create safe cycle routes; allocate subsidies for purchasing bikes and electric and hybrid motorcycles. Instead of expanding streets, constructing two- or three-floor highways or tunnels, the ruling body must move towards improving BRTs and public transportation. It also needs to make car driving more difficult for people so they opt for public transportation or bikes.”

Asked how one can see the impact of the campaign on Tuesday’s traffic, the environment official said air pollution and traffic congestion, as well as the number of accidents and traffic tickets, are being monitored on Tuesdays.

When queried about the future of the campaign, Darvish’s response was positive, with a big smile on his face, saying “Iranians are unpredictable.”

The official, who rides his bike to the office and his sessions across the capital, says “The campaign is a point of unity between the government and people; it promotes social capital and unity; it is different from other campaigns in that all enjoy the benefits. The movement is to change people’s mindsets, particularly for educated people and environment lovers, so that they assume responsibility for their society.”

Many officials, according to Darvish, have already joined the campaign including Masoumeh Ebtekar, the head of the Department of Environment, who uses the subway and taxi on Tuesdays to go to her office.

“The Department of Environment is also paving the way for the campaign to be recognized among people. We have negotiated with insurance companies to give discounts on third-party and body-part insurances to the drivers without traffic tickets on Tuesdays. We have also talked to municipality officials to specify some places in the subways and BRTs for campaign posters to appear soon. Also, there are some companies and organizations like the Department of Environment, which have planned some incentives for employees who do not use personal cars for commuting between home and the office,” he explained.

This campaign will certainly broaden Iranians’ cultural horizons, setting them as an example in the region, where most of the countries are entangled in domestic conflict, the official concluded while watering the flowers in his office.