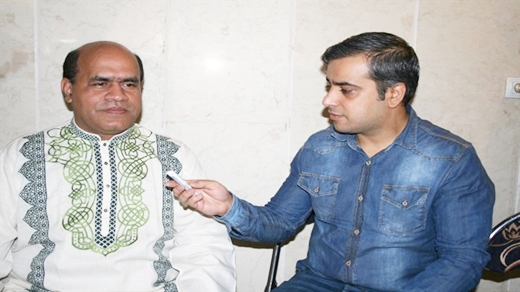 The people of Bangladesh are celebrating the arrival of the New Bengali Year (April 14). A glance at the history of Iran-Bangladesh relations indicates that the two countries have always enjoyed close ties. Iranian and Bangladeshi officials have always underlined the need to foster and maintain friendly and brotherly relations between the two states.

Iran is willing to forge all-out ties with Bangladesh without any restriction, said Iranian Foreign Minister Mohammad Javad Zarif in a meeting with Bangladeshi Ambassador to Tehran Majibur Rahman Bhuiyan.

Bhuiyan has also voiced the avid interest of his country’s officials in broadening consultations with their Iranian counterparts, hoping that Tehran and Dhaka will witness an increase in economic and cultural cooperation in the near future.

People in Bangladesh started celebrating their new year about six centuries ago when the Mughal emperor, Akbar (1605) modified, developed and reintroduced the Bengali Calendar.

‘Pohela Boishakh’, or Nobo Borsho, is the country’s most important celebration which is held annually. People observe this day by wearing local and traditional costumes, going to fairs, known as ‘Boishakhi Mela’ which features musical and cultural events, eat pastry and make wishes for the new year.

Out of Bangladesh’s total population, 89.7 percent are Muslims and the rest are Hindus, Buddhists or Christians.

In an exclusive interview with Iran Daily on the sideline of a ceremony to celebrate the arrival of Bengali New Year at the Bangladesh Embassy in Tehran, Bhuiyan expounded on Bengali New Year celebrations as well as political and economic ties between Iran and Bangladesh.

IRAN DAILY: Would you please tell us about the program?

MAJIBUR RAHMAN BHUIYAN: First, I welcome all of you. The program starts with an exhibition of photographs and a display of our food items and is followed by a cultural program featuring music and poetry recitation. Then we read a very short welcome message from the ambassador explaining the occasion, screen a video on Bangladeshi culture and serve Bangladeshi cuisines for lunch.

Can you tell us about Iran-Bangladesh relations? How do you evaluate the current level of ties?

Relations between the two countries have always been very favorable because, for centuries, we have had connections in the cultural, religious, business and political fields. So at the moment, we have very close relations and lots of goodwill for each other. At present, the Iranian and Bangladeshi governments as well as the two countries’ respective embassies in Tehran and Dhaka are doing their best to translate this goodwill into more expanded and deep cooperation.

How would you evaluate economic and trade relations? What is the current volume of transactions between the two states?

At the moment, trade ties are not very significant. But prospects for increasing trade ties are excellent and numerous. Iranian and Bangladeshi embassies Dhaka and Tehran respectively are in talks with relevant state and private sectors to raise the level of ties by identifying suitable fields for cooperation. Efforts are also underway by both sides to exchange a number of trade delegations.

Given the gradual removal of Western sanctions on Iran, what is your prediction about the expansion of trade ties between the two states in the post-JCPOA era?

It is crystal clear that economic ties will increase since all trade obstacles and restrictions will be eased and, gradually, we will find the opportunity to know how the trade exchanges between the two sides can be increased. I am quite hopeful that economic ties between Iran and Bangladesh will expand.

Given that you are celebrating the arrival of the Bengali New Year, do you have anything special to tell us in this respect?

New Year is a time for renewing ties, exchanging greetings, leaving behind the shortcoming we had in the past, looking forward to good things in the future and thinking about how to move ahead.

What do you make of Iran’s nuclear deal?

I do not have any particular opinion on this issue. Since Bangladesh has always favored peace and stability in the region, it welcomes any move to ensure this.