Ayatollah Khamenei Writes Note in Praise of ‘Tintin and Sinbad’ 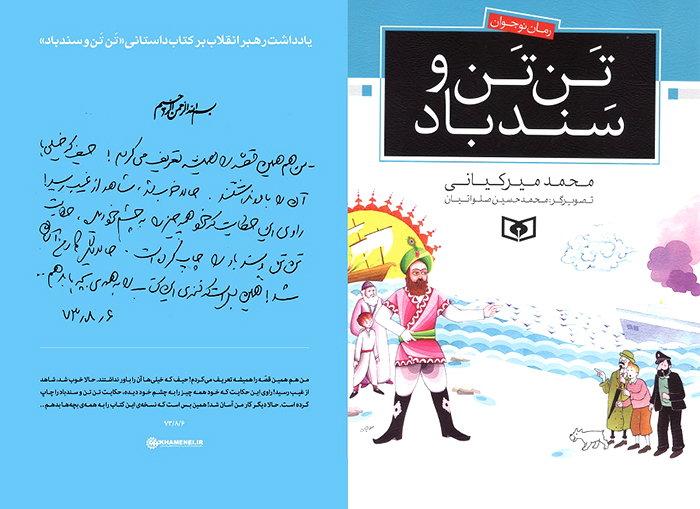 Leader of the Islamic Revolution Ayatollah Seyyed Ali Khamenei has written a short comment to praise the Iranian teen book “Tintin and Sinbad”, which deals with the story of the western adventurer and reporter Tintin and the Middle Eastern sailor Sinbad.

The book Tintin and Sinbad, written by Mohammad Mirkiani, is an Iranian book for teenagers that relates the story of Tintin, a fictional character created by the Belgian cartoonist Georges Remi, and Sinbad, a fictional sailor and the hero of a story-cycle of Middle Eastern origin.

In this note, the Leader advices all teenagers to read the book, and voices his pleasure to see the book is relating what he himself has always been telling other people, but they did not believe it.

The book reportedly deals with a failed plot by the Western Tintin against Sinbad, a symbol of the Orient. Here is IFP’s translation of the Leader’s note: “I always used to tell the same story. It’s a pity that not many people believed it. Now it’s good and here’s the evidence! The narrator of this story, who has witnessed everything with his own eyes, has published the story of Tintin and Sinbad. Now my job is easier! The only thing I need to do is to present a copy of the book to all children,” the Leader said about the teen book.

Here is what Ayatollah Khamenei’s official website has written about the book:

‘Tintin & Sinbad’ is a work of fiction and metaphor narrating contrasts between two characters of Tintin and Sinbad, each representing western and eastern cultures, respectively, written for teenagers. In this book, characters like Sinbad, Ali Baba and the like, who were once very popular in eastern stories, go to a challenge against exaggerated protagonists and paper tigers of west. Contrary to illogical and aggrandized powers of western heroes, eastern legends take logical and rational measures and stand against their invasion and aggressions with patience and unity and save their land. The repeated story of western invasions on eastern territories and colonialism Asian and African countries suffered, reappears in a new form and with the objective of dominance over minds and cultures is narrated in ‘Tintin and Sinbad.’