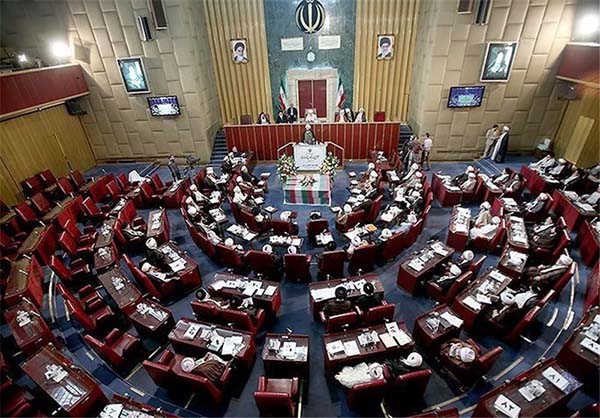 A final statement from the opening session of the 5th Assembly of Experts addressed the unsatisfactory implementation of the nuclear deal [JCPOA] by world powers, and called on the government to show an appropriate reaction.

The 5th Assembly of Experts (AoE) opened on Tuesday May 24, as the 86 newly-elected clerics convened to choose their new chairperson. Ayatollah Ahmad Jannati, a senior conservative cleric, was selected as the new head of the Assembly.

This result was meaningful, as supporters of Ayatollah Akbar Hashemi Rafsanjani, who achieved a great victory in February polls, believed the former president or one of his supporters would be elected as the new chair.

According to a report by Mehr, the two-day meeting of the AoE concluded on Wednesday May 25 with a statement in which the members voiced major concerns over cultural, political, regional, and nuclear issues.

Read aloud by Ayatollah Ghorbanali Dorri-Najafabadi, the statement referred to the hotly debated issue of the JCPOA, in the face of recent despair voiced by some government officials, notably CBI Governor Valiollah Seif, who had been quoted as saying that the JCPOA implementation had achieved “almost nothing” in terms of relieving economic hardship.

“The US conduct on the JCPOA has violated the spirit of the agreement, the most important part of which was the removal of sanctions. We believe that government officials should draw upon the Leader’s 9-point directive to prepare a proper response to western side and their acts of sabotage,” it emphasized.

The statement also touched upon the issue of the Hajj pilgrimage, an area of tension between Iran and Saudi Arabia, and one over which Iranian negotiators claimed that the Saudi regime proved quite intransigent.

“The AoE condemns the divisive policies of the Saudi regime, and calls on Hajj and Pilgrimage Organization and Foreign Ministry officials to address the issue of Hajj seriously and to effectively mount pressure on Saudi officials to accept the consequences of last year’s Hajj Mina tragedy, thus depriving them of pretexts for denigrating the national glory of Iranians,” it stated.

It also condemned the silence of “so-called human rights advocates” in the face of Saudi encroachments in Lebanon, Yemen, Syria, Iraq, Palestine, and Bahrain and its unashamed support for different terrorist groups including ISIS and Al-Qaeda. Further condemnations were applied to Saudi Arabia for blacklisting organizations such as the Lebanese Resistance Movement, Hezbollah, which, they said, had performed brilliantly in fighting terrorism in Syria and Lebanon.