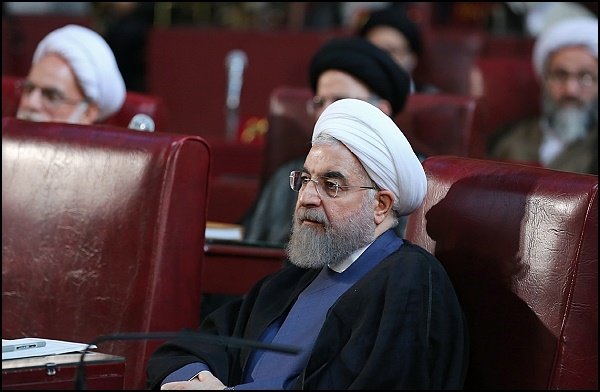 President Rouhani told the media at the close of the first session of Iran’s 5th Assembly of Experts that the assembly will reassure people when its time comes.

“This is an assembly for a difficult time for the nation, and it reassures Iranians,” said Rouhani after leaving the official inauguration session of the new round of the Assembly.

The fifth Assembly of Experts opened its new term on Tuesday May 24 in Tehran. Following the recitation of the Iranian Leader’s message to the new assembly, voting to elect the new chair of the 88-member assembly was held, and Ayatollah Ahmad Jannati was elected for a two-year term.

Rouhani, who held his seat in the Assembly in the February election, voiced his hope that Iranians feel safe about the future of their country after the new Assembly started its work.

“I wish long years of health for the Leader of the Islamic Revolution, obviating the need for a hard choice to be made by the Assembly,” said Rouhani, referring to the major goal of the body in appointing and supervising the Leader of the country, adding that it remained important that the job is done by jurisprudents who have been elected by the nation.

“The appointment of the Leader is the peak of religious democracy in Iran, as all the members of the Assembly of Experts are elected by the people, and all of them are qualified jurisprudents who have been vetted by the Guardian Council,” maintained the president.

Rouhani boasted that the appointment of the incumbent Leader of Iran on June 4, 1989, in a short time surprised the world for the precise mechanism in an immediate measure.

Voting for the 10th parliamentary and 5th Assembly of Experts elections was held on February 26 in all areas of Iran.