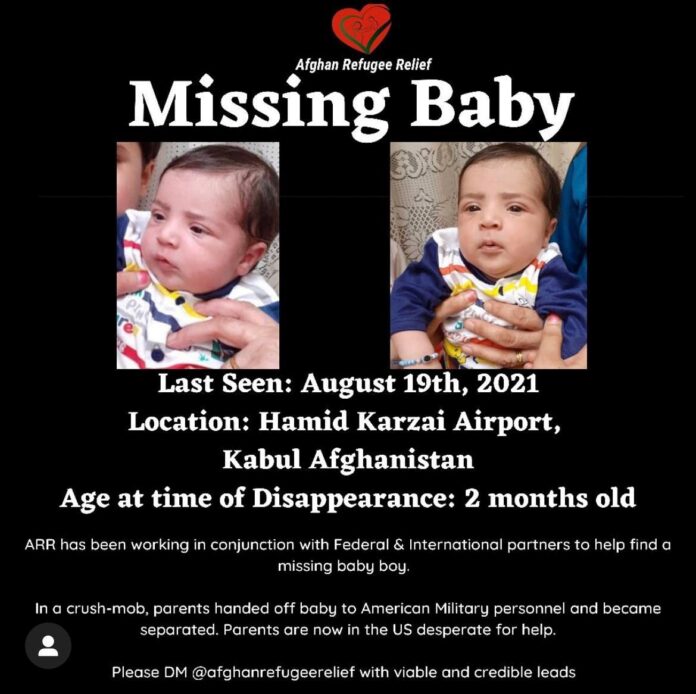 An Afghan baby is still missing months after his desperate parents handed him to an American soldier over a fence outside the gates of Kabul airport. It came days after Afghanistan’s capital fell to the Taliban group last August when the baby was two months old.

Days after the Taliban seized Kabul, Mirza Ali Ahmadi and his wife Suraya along with their five children were among a chaotic crowd outside the gates of the Kabul International Airport and were trying to a find a way inside and flee the country by an American aircraft.

Fearing that the newborn, named Sohail, would get crushed in the melee, the parents handed him to an American soldier, who had bent over the fence asking them if they needed help. They hoped that they would soon reunite with their son once they got inside.

More than a half hour later, when they finally reached the other side of the airport fence Sohail was nowhere to be found.

His father, 35, who worked as a security guard at the US Embassy in Kabul for 10 years, began desperately asking every official he encountered about his baby’s whereabouts, but no traces of the American soldier and their beloved son were to be found.

In an interview through a translator, Mr. Ahmadi said that a military commander helped him find his son in the chaotic airport, but all to no avail, adding, “He walked with me all around the airport to search everywhere”. But Sohail had vanished into thin air.

A civilian official told Mr. Ahmadi that his son might have been flown out of Afghanistan by himself, since they “don’t have resources to keep the baby here.”

Mr. Ahmadi, his wife, 32, and their other children,17, 9, 6 and 3 years old, were ultimately put on a flight to Qatar and then to Germany and eventually landed in the United States. The family are now at Fort Bliss in Texas with other Afghan refugees waiting to be resettled somewhere in the country.

He has desperately tried hard to find traces of Sohail, seeking help from every person he comes across, including aid workers and US officials.

“Everyone promises they will do their best, but they are just promises,” he stated.

An Afghan refugee support group created a “Missing Baby” sign with Sohail’s photo on it and is circulating it among their networks hoping that someone will recognize him.

“All I am doing is thinking about my child. Everyone that is calling me, my mother, my father, my sister, they all comfort me and say, ‘Don’t worry, God is kind, your son will be found’,” said Suraya, who also spoke through a translator, adding that she cries most of the time and that her other children are distraught.

The Taliban, who previously ruled Afghanistan from 1996 to 2001, took power in Afghanistan again as the US was in the middle of a chaotic troop withdrawal from the country. The group announced the formation of a caretaker government in early September.

The US completed the chaotic withdrawal of its forces from Afghanistan by the end of August, in what observers saw as a botched exit after a futile military adventure lasting 20 years.

The US-led NATO alliance invaded the South Asian country in 2001 under the pretext of ‘war on terror’, to decimate the Taliban and Al-Qaeda. None of the goals were achieved despite massive investment.