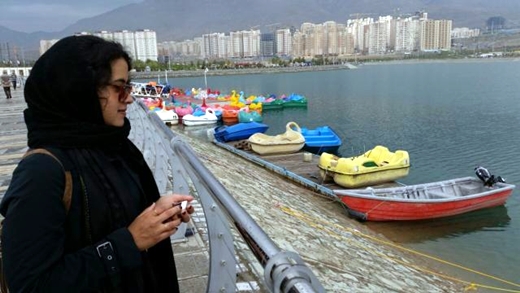 A Saudi woman who has lived in Iran for the past ten months says, “Iranians are very hospitable and are able to separate between politics and people in a way that I think is really unique to the Middle East".

The experiences of a Saudi woman who has lived in Iran for the past ten months were covered by observers.france24.com on October 15. One day later Jamejamonline, an Iranian website, released the Farsi translation of the report on Sara Masry and what she thinks about her 10-month-long stay in Iran. IFP found the original report on the website of the French international broadcaster. The following is the original report in its entirety:

With tensions between Iran and Saudi Arabia running feverishly high, this may seem like an odd time for a young Saudi woman to choose to study in Iran. Yet that’s exactly what our Observer is doing. She details her experiences on her blog, “Saudi in Iran”.

Iran and Saudi Arabia have never had very good relations. Iran is a Shiite theocracy, while Saudi Arabia is the home of Wahhabism, an ultra-conservative branch of Sunni Islam. And today, because of proxy wars between the two countries in Syria and Yemen, their relationship is more volatile than ever. Their latest feud is over the stampede that killed more than 1,600 people in Mecca: several hundred Iranians were among the pilgrims who perished, and were blamed by Saudi authorities for allegedly starting the stampede. Tehran, meanwhile, placed the blame for the tragedy squarely on the Saudi authorities.

After the Mecca stampede, Iranians demonstrated in front of the Saudi embassy in Tehran and the Saudi consulate in Mashhad. In Saudi Arabia, some imams declared that killing Shiites was ‘halal’, or allowed.

In this context, Saudi blogger Sara Masry, who has lived and studied in Tehran for the past ten months, chooses to focus in her blog on her day-to-day life there, avoiding all politics. She did, however, make a small exception to address the Mecca tragedy: “This event is now polarizing the two populations even further … while pushing the possibility of mutual understanding and empathy back another few decades”.

“Iranians are very hospitable, and are able to separate between politics and people in a way that I think is really unique to the Middle East”

Sara Masry grew up in Saudi Arabia before attending university in London. She is now following a course on Iranian studies in Tehran.

“I have always been interested in Iran, its culture, and its history, and was able to study it in depth in London. But one day, I decided studying from afar was not enough: I wanted to see the reality of this country myself.

When I told my Saudi friends and family about my plan, some of them were very worried and tried to dissuade me. In part, this was because I had a good job opportunity in London, but it was also because there’s not a lot of positive news about Iran in the media!

However, living here, I have found vast majority of Iranians are very hospitable, and are able to separate between politics and people in a way that I think is really unique to the Middle East. Not one person I have come across has cared that I’m Saudi, and not one has cared that I’m Sunni. When I meet new people, many think that I’m Indian because of my accent in Persian. When they learn I’m Saudi, the questions begin: Why are you here? Do you like our country? Are you having a good experience in Iran?

I honestly can’t tell you of a single bad experience. I know, of course, that racism and chauvinism exist here, like in many countries, but fortunately in ten months, I have not experienced it.

“I want to create a bridge between people in both nations”

A few months ago, I lost my wallet. In it, there was a lot of money, since I had just changed some British pounds to Toman. There was also my Saudi identity card. A few days later, a woman called me and said she had my wallet. She was the wife of the taxi driver who had found my wallet, and she had been searching for me for days!

After the Hajj stampede, I was paying for lunch at the cafeteria and one of my friends came up and made a joke to the cashier: ‘Don’t sell her anything, she’s Saudi!’ and ran off. A woman who had heard this came up to me and for five minutes apologized to me for her countryman’s behavior. Even after I told her it was just a joke, she said there was no place for such jokes here!

Most of the time, I blog about social and cultural experiences, and about my travels throughout the country. My goal is to create a bridge between people in both nations, to dispel myths and stereotypes. Right now, I write in English, but I plan to translate it into Arabic… Next step, Persian!