Zarif and Kerry Meet in Norway 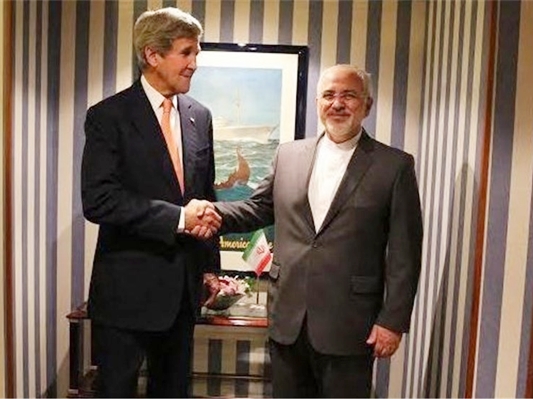 Iranian Foreign Minister Mohammad Javad Zarif and US Secretary of State John Kerry held a meeting in Oslo on Wednesday morning, June 15, for talks on the Joint Comprehensive Plan of Action (JCPOA), an agreement on Tehran’s nuclear program.

The meeting took place on the sidelines of the 2016 edition of the Oslo Forum, an annual international conference of armed conflict mediators and peace process actors.

In the get-together at an Oslo hotel, the two senior diplomats discussed issues about the implementation process of the JCPOA, the nuclear agreement between Iran and the Group 5+1 (Russia, China, the US, Britain, France and Germany).

Earlier on Tuesday, diplomatic delegations from Iran and the EU, led by Zarif and the EU Foreign Policy Chief Federica Mogherini, also met in Oslo and discussed ways to remove obstacles to JCPOA implementation.

While the nuclear accord came into force in January, Iran has complained about the failure of some of the parties, especially the US, to fully implement the deal.

In Tehran, Leader of the Islamic Revolution Ayatollah Seyed Ali Khamenei in a Tuesday meeting with senior Iranian officials took a swipe at Washington for its failure to honour commitments under the JCPOA, saying, “The duty of the other side was removing the sanctions, but it has not fulfilled that duty, meaning that it has lifted part of the sanctions in some way, but the sanctions have not been lifted practically.”

While US officials claim verbally that there is no obstacle to banking relations with Iran, they actually take measures that the international banks “would not dare to trade with Iran,” the Leader stressed.

Imam Khamenei also noted that nobody should justify Washington’s serious breach of the deal in stifling the foreign banks’ interaction with Iran.

The Leader also touched on the US obstructive actions when it comes to insurance for the Iranian oil tankers, saying the US which is part of the “major structures” of insurance companies will not let that structure offer services to Iran.

Moreover, the Leader noted, Iran has still problems in having access to its oil incomes that have been blocked in the banks of other countries, since those assets are in US dollars and have been kept frozen due to US hostility.