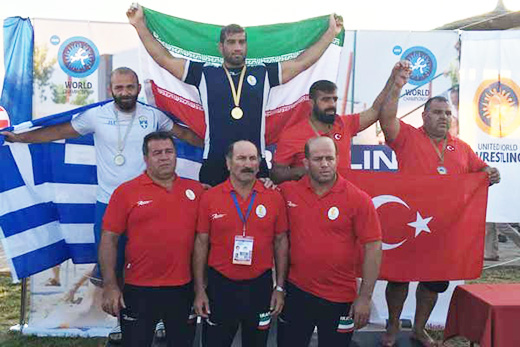 All senior Iranian representatives at the tournament managed to bag gold medals, thus leading the international sporting event with a total of 40 points. The national teams of Greece and Turkey landed second and third, respectively.

At the 70kg weight category, Iran’s Mohammad Naderi thrashed Turkish, Romanian and Brazilian contestants en route to the final round, where he downed his Greek rival to come first.

Payman Heidari, who had also been part of the 80kg group in the junior event on Sunday, struck an draw in the first round, then later overcame subsequent competitors from Turkey, Greece, Hungary and Russia to win the gold medal.

Iran’s gold winner in the 90kg category was Mohammad Sadati, who subdued the Greek contestant in the final, having initially defeated Norwegian, Romanian, Hungarian and Greek rivals.

Jaber Sadeghzadeh overwhelmed his Greek opponent in the final competition of the men’s over 90kg class, and was awarded the gold medal. He earlier defeated a Greek rival and a representative from Turkey in his march to the gold.

The 2016 Beach Wrestling World Championships started in Fažana, Croatia, on June 3, and came to an end on June 5.