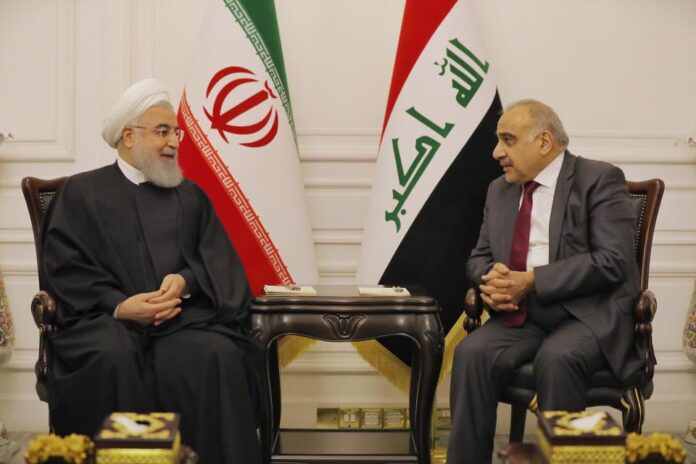 Iraqi Prime Minister Adil Abdul-Mahdi travelled to Iran on Monday evening in an unexpected visit that lasted only for a couple of hours, holding talks with Iran’s president.

The trip was more significant than a formal visit to Iran by the top official of a neighboring country, because it came at a time of specific regional and internal situation facing both Iraq and Iran.

The most likely reasons behind the visit could be discusses in several dimensions:

The political situation in recent months has not been suitable for Abdul-Mahdi. Although the Iraqi government has emerged quite successful with initiatives in the foreign policy arena, it faces many problems inside, as there is still no tangible change in the quality of social services nearly a year after formation of the cabinet and several months after its completion.

The circumstances are so unfavorable that a formal opposition has been shaped in Iraq, and people have poured into the streets several times in an act of protest. Even the religious authorities have warned against the continuation of such trend.

In a recent interview with AFP, former Iraqi prime minster Haider al-Abadi touched on the current circumstances in Iraq, voicing readiness to return to power by saying that he has good intentions to do so.

Abdul-Mahdi was accompanied by the ministers of oil, finance, transportation, defense, and by the national security advisor in the visit to Iran.

The arrangement of his delegation reveals that the economic and security issues were high on the agenda in the trip, and the visit should be considered within that framework.

From the economic viewpoint, the anti-Iran sanctions have had considerable impacts on Iraq. The Iraqi officials have repeatedly voiced opposition to the US’ unilateral sanctions against Iran, arguing that there is no replacement for the import of energy from Iran, particularly in the hot season when Iraq’s demand for gas and power is much higher, in such a way that the supply of energy is directly related to Iraq’s national security.

There are popular protests against the blackouts and shortage of water in Iraq in the summertime every year. The city of Basra had tumultuous weeks last year.

The situation became so tough for Baghdad that Washington had to exempt Iraq from the sanctions for a period of time.

On the other hand, the oil exchanges between the two countries are of special significance even in the current situation. The two countries maintain relations in this area, and the ties are such close that have angered the US. The US secretary of treasury is said to have travelled to Iraq recently to warn the Iraqis about these ties. However, it is not clear how seriously Baghdad has taken the warning.

The two countries are also conducting banking and financial transactions. Maybe the Iraqi finance minister was in the delegation to facilitate this section.

A number of political experts believe that Abdul-Mahdi’s visit to Iran in the current circumstances was related to the regional developments, in which Saudi Arabia and the United Arab Emirates have each suffered losses from the foreign policies they have been adopting in recent years, and are rectifying them.

An example is the gradual withdrawal of Emirati forces from Yemen and a change in the blatant, hostile stances against the Islamic Republic of Iran, which was obvious in the attack on four oil tankers in the Port of Fujairah. The UAE did not name any specific country in its report to the United Nations Security Council, and preferred to remain silent on the subject.

In the meantime, Iraq, which is known as a bridge between Iran and the Arab world, can take a role and prepare the ground for a change in the region’s current situation.

Iraq has got such potential, and could convene meetings on the issue in Baghdad, which would be welcomed by Iran, according to the Supreme National Security Council.

As regards the international aspect, tensions have arisen in the region between Iran and two other countries, the US and the UK, over the JCPOA and the issue of oil tankers.

Trump, who created a new global crisis by withdrawing from the JCPOA, does not sill accept the fact that this issue would not be resolved with sanctions and pressures, and that he must return to the negotiation table by lifting the sanctions.

Moreover, the efforts in this regard made by some countries like Iraq, Japan, France and Oman have not yielded results so far.

But the conditions are somehow different in the standoff with the UK, since the tension with Britain could be settled rapidly and through diplomatic channels with the release of the Iranian oil tanker that has been seized in Gibraltar.

It appears that the UK authorities, who are also grappling with the internal crisis of Brexit, are willing to resolve the tension with Iran in an honorable manner.

Another notable subject in this regard will be Omani Foreign Minister Yusuf bin Alawi’s visit to Iran next week. He is trying to have the regional and international crises resolved diplomatically.

Speaking about his trip to Iran at a press conference last night, the Iraqi prime minister said he has discussed the subject of the captured oil tankers in the meeting with Hassan Rouhani and has emphasized the necessity to relieve the tensions.

He also noted that Iraq will have a significant role in de-escalation of tensions, and will be friends with everyone.

No matter which files Abdul-Mahdi had brought to Iran, one could say that he will receive a welcome from Tehran and face Iran’s help in addressing them.