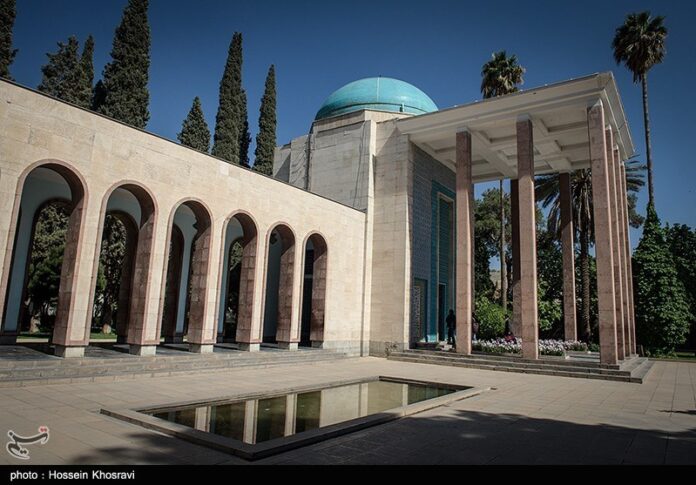 The mausoleum of Sa’adi, known also as the Sadiyeh, is one of the major tourist attractions of Shiraz which draws huge number of Iranians and non-Iranians.

Sa’adi is a globally known scholar and poet whose words have touched many hearts across the world; and awakened many minds to take new steps to reach higher levels of humanity. Life of a poet

Sa’adi lived in 13th century- but is a man for all centuries. He lost his father in infancy, had a difficult childhood and went through the youth in poverty. The life’s hardships, however, never stopped him from learning: he left his birthplace to Baghdad where Nezamieh University was the center of knowledge and many studied there in the Islamic world. Among various subjects that he studied there, he proved to be excellent in Arabic literature, Islamic sciences, history, governance, law and Islamic theology, the Destination Iran website reported. Sa’adi was a man of traveling.  The Mongols’ invasion and Iran’s unstable situation led the poet to a lifetime of living abroad. Subsequently, he travelled to many countries such as Anatolia, Syria, Egypt, Iraq, Sindh (Today’s Pakistan), India, Central Asia and Hijaz (Today’s Saudi Arabia).

After 30 years, the elderly Sa’adi eventually returned to his birthplace where he was welcomed and highly respected. He was titled “Sheikh” because of his knowledge, and followers started to pursue his values and words. Within two years after his return to Shiraz, Sa’adi wrote his two most famous books: Bustan, also known as Bostan (The Orchard) in 1257 and Golestan, known as Gulistan (The Rose Garden) in 1258. Bostan is entirely in verse introduces moral virtues and Gulistan is mainly in prose containing stories and personal anecdotes.

Sa’adi died in Shiraz and was buried in a village outside the city. The village is now inside Shiraz, but at the outskirts, in a relatively poor neighborhood.

His works in forms of Lyrics and Odes are also well-known by the enthusiasts of Persian literature. He has created some works in Arabic as well.

The rich depth of his writings and ideas with social and moral values have gone beyond time. His words have been quoted by Persian speaking people inside Iran and outside alike. Even Western sources have quoted him and continue to do so. He’s widely recognized as one of the great masters of classical Persian literature. Some even title him second only after Ferdowsi whose position for saving the Persian Language is unparalleled and no one could even do what he did.

The reputation of Sa’adi in Persian literature is because of his eloquence in using the language. Sa’adi’s works being easy to understand after 8 centuries, his ideas are still admirable for Persian speakers. Sa’adi tried to use Farsi words instead of the borrowed Arabic ones, which made the use of Farsi words much more popular and understandable in everyday life; as Arabic doesn’t have the same origin as Persian.

The present mausoleum of Sa’adi was built under the reign of Karimkhan-e Zand,  ruler of Shiraz in the 18th century. It is a multi-sided building with a cupola on top. From outside, it may look like a square structure due to a flat facade decorated with Shirazi tiles that depict the tree of life in various colors. However, the building’s eight corners are visible inside the building with its large lamp hanging from the ceiling. Sa’adi’s grave is beautifully carved in Persian. The building was later connected to the tomb of another poet, Shurideh Shirazi, by a colonnade portico.

The mausoleum’s atmosphere is far more attractive than its architecture, which has off course its awn charms.

The Mausoleum of Sa’adi is inside a garden with beautiful flowers and several cypress trees. There is a fish pond in the mausoleum’s basement. Fish cross the water channels which has been in use since the 18th century; then come to the central pond where they are seen by visitors.

As more and more people come to visit Sa’adi’s Mausoleum and show their respect for the poet, the garden has been recently enlarged in order to accommodate three times more visitors.