Iran Front Page
Home Hard News US must not be allowed to talk of Iraq disintegration: Leader 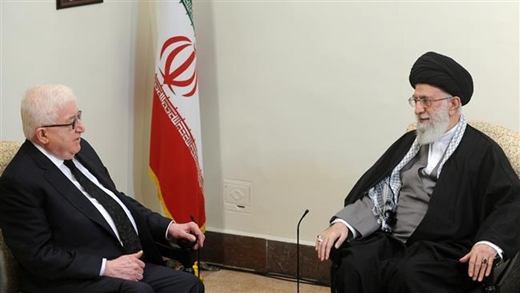 Leader of the Islamic Revolution Ayatollah Seyyed Ali Khamenei says the US must not be allowed to speak of disintegrating Iraq.

Ayatollah Khamenei made the remark in a meeting with Iraqi President Fuad Masum in the Iranian capital, Tehran, on Tuesday.

“The people of Iraq, including Shias, Sunnis, Kurds and Arabs, have been co-existing without a problem for centuries; but, unfortunately, certain regional countries as well as foreigners seek to exaggerate disagreements,” the Leader said.

Ayatollah Khamenei said such attempts should be countered and any action that would prompt discord should be avoided.

The Leader said disagreements and their publicization would pave the way for meddling by outsiders, noting that the situation should not take such a turn as to allow Americans to dare openly speak of Iraq’s disintegration.

“Why should such a country as Iraq – a large, prosperous country with a thousand-year history – be disintegrated and divided into smaller parts, and thereby always be exposed to disagreement and confrontation?” Ayatollah Khamenei said.

The Leader expressed confidence that Iraqi officials will adjust their country’s relations with other states, including the US, with due regard for the interests of the Iraqi people, but emphasized that the Americans should not be allowed to act as if Iraq is their “personal property.”

Ayatollah Khamenei said Iraqi youths have undergone awakening and are now aware of their capabilities, describing the Popular Mobilization forces in Iraq as the manifestation of the Iraqi people’s awakening.

President Masum said the Leader’s advice on the necessity of maintaining unity and avoiding discord in Iraq “will certainly be effective.”

The northern and western parts of Iraq have been plagued by violence since June 2014, when Takfiri Daesh terrorist began an offensive through Iraqi territory. The Iraqi army and Popular Mobilization units are jointly battling the terrorists to take back militant-held regions.

The Iraqi president also thanked Iran for its assistance, particularly at a time when Iraq is facing the violent offensive by Takfiri Daesh terrorists.

He also called for the further development of relations between Baghdad and Tehran. 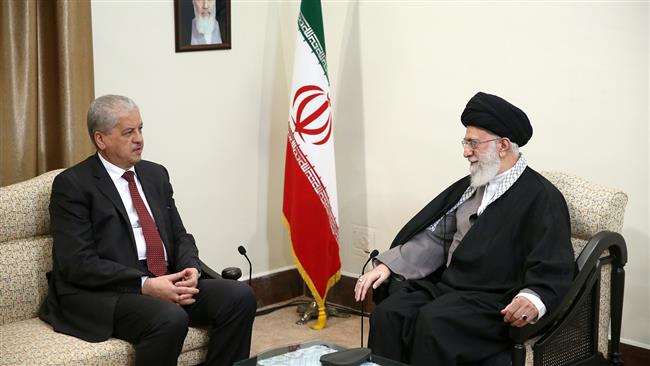 During the latter meeting, Ayatollah Khamenei said Daesh and the terrorist groups falsely operating in the name of Islam have been created by and are receiving support from certain entities.

“The Islamic countries that care and share more common understanding can reach a practical way of fighting terrorists through dialog and cooperation,” the Leader said.

The Leader pointed to the resistance front that had been established by Algeria, Iran, Syria and several other countries at the time of the victory of the 1979 Islamic Revolution, and said certain countries that blindly follow the US prevented the continuation of the activities of that formation of countries.

“If such a formation is established [again], these Islamic countries can have impacts in important issues in the Muslim world and take practical measures for [tackling] regional problems and fighting terrorists,” Ayatollah Khamenei emphasized.

Ayatollah Khamenei said the level of cooperation between Tehran and Algiers as “very low,” and expressed hope that the ties would soon expand.

Sellal said the viewpoints of Algeria and Iran regarding political issues, especially on the fight against Daesh and other terrorists, are very similar, and hoped that economic relations between the two countries also reach an acceptable level.

Iraqi President Masum and Algerian Prime Minister Sellal both traveled to the Iranian capital to participate in the third summit of the Gas Exporting Countries Forum (GECF).