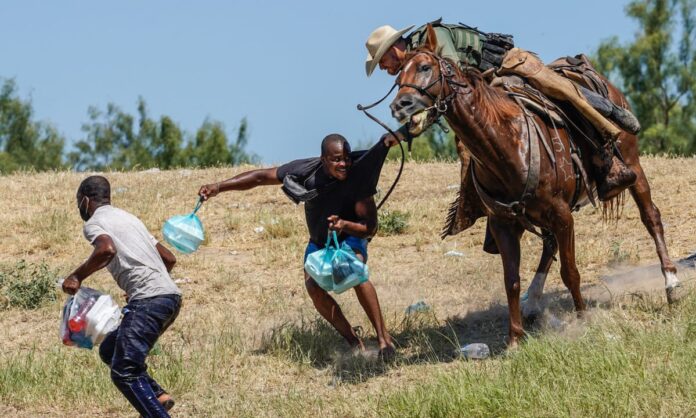 US Border Patrol agents whipped at migrants in Texas who were attempting to make their way to an encampment where thousands of Haitian migrants have sought refuge.

The videos and images of Border Patrol agents on horseback charging at Haitian migrants drew an emotional response online since the Border Patrol has a troubled and violent history against communities of color.

Reuters witnesses saw mounted officers wearing cowboy hats blocking the paths of migrants, and one officer unfurling a cord resembling a lariat, which he swung near a migrant’s face. A video showing a border guard apparently threatening migrants with the cords was shared on social media.

US government officials have called the situation in Del Rio “unprecedented” and the Joe Biden administration began deportation flights for scores of migrants held there. Removal flights are going to Haiti, Mexico, Ecuador and Northern Triangle countries.

The Department of Homeland Security has also sent 400 agents to Del Rio to assist with the process.

A DHS spokesperson announced the agency “does not tolerate the abuse of migrants in our custody and we take these allegations very seriously”.

Customs and Border Protection’s Office of Professional Responsibility is investigating the incident and has alerted the DHS Office of Inspector General.

The White House on Monday criticized the use of horse reins to threaten Haitian migrants, saying it is seeking more information on the “horrific” viral images and videos.

“I don’t think anyone seeing that footage would think it was acceptable or appropriate,” White House spokeswoman Jen Psaki told reporters.

“I don’t have the full context. I can’t imagine what context would make that appropriate,” she added.

The State Department issued a statement on Monday night saying that Secretary of State Antony Blinken spoke with Haitian Prime Minister Ariel Henry “about the migrant crisis and efforts to repatriate migrants who arrived at the southern border”.

Homeland Security officials have acknowledged internally that deported Haitian immigrants “may face harm” upon their return to the country due to its political instability and state of violence, according to BuzzFeed.

Rights groups in the United States have blasted the Biden administration for its planned expulsion of thousands of migrants and asylum seekers who have been camped under a bridge in Del Rio, after wading across the Rio Grande River from Mexico.