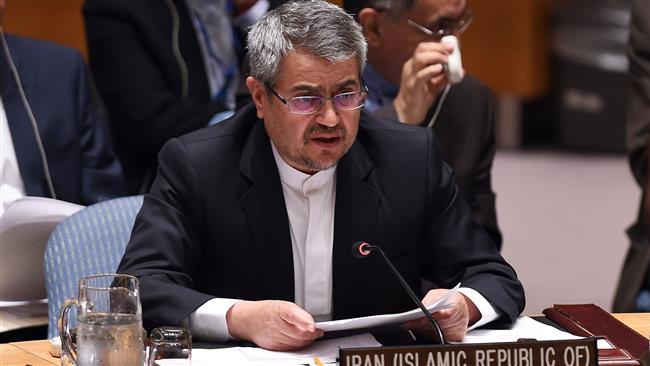 A senior Iranian diplomat says a decision by US President Donald Trump to recognize Jerusalem al-Quds as Israel’s “capital” is aimed at legitimizing the Israeli regime's occupation of Palestine.

“Occupation of the Palestinian land lies at the root of all crises in our region and any action to deny the inalienable rights of the Palestinian people, including with regard to the holy city of al-Quds and particularly al-Aqsa Mosque, will only result in more bloodshed and rage,” Iran’s Ambassador and Permanent Representative to the United Nations Gholamali Khoshroo said in an address to a United Nations General Assembly meeting in New York on Friday.

He added that bids aimed at legitimizing the Israeli occupation in the Middle East region by rejecting the historical realities would “gravely” undermine peace.

Iran strongly condemns the US recognition of Jerusalem al-Quds as the Israeli regime’s capital and the plan to transfer the US embassy to this holy city, he said.

The Iranian envoy emphasized that the “unilateral” act constitutes a “grave violation of international law,” as any territorial acquisition resulting from the use of force is illegal.

“The US action is not only illegal but also indicates how hypocritical its policy is with regard to the peace and stability in the Middle East,” Khoshroo said.

He added that the international community holds the US and the Israeli regime responsible for “all dangerous consequences of this reckless and illegal act.”

“Throughout history, occupation and peace have never gone hand in hand. The case at hand is no exception, and there can be no peace and justice as long as the occupation of the Palestinian land continues,” he pointed out.

The US president on Wednesday defied global warnings and said Washington formally recognizes Jerusalem al-Quds as the “capital” of Israel, and will begin the process of moving its embassy to the occupied city, breaking with decades of American policy despite widespread international opposition.

The Iranian Army on Friday denounced the recent “foolish” US move and said the United States and Israel are responsible for escalating tensions in the Middle East.

“The foolish and fresh move by the White House leaders to officially recognize Jerusalem al-Quds as the capital of the fake Zionist regime [of Israel] is a new plot to violate the rights of the Muslim Palestinian people,” the Iranian Army said in a statement.

Large groups of Iranians in the capital Tehran and other cities staged massive rallies after Friday prayers to protest against Trump’s recognition of Jerusalem al-Quds as Israel’s “capital.”