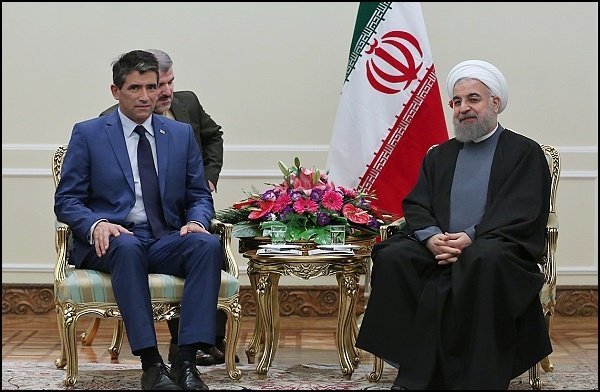 President Hassan Rouhani deemed the expansion of relations with Latin American countries as a principal policy pursued by the Islamic Republic of Iran.

The Iranian President made the remarks during a meeting with Uruguayan Vice-President Raul Sendic in Tehran on Tuesday morning, “Tehran and Montevideo possess great determination to strengthen multilateral relations and no third-party country can affect these friendly ties.”

“The Formation of a Joint Economic Commission as well as the implementation of the agreements reached between Iran and Uruguay will open a new chapter in the relations between the two countries,” he added.

President Rouhani pointed to the economic capacities of the two states, asserting “In order to accelerate collaborations, this common potential needs to become operational more than the past especially in the private sector.”

The official deemed implementation of joint projects as a prerequisite for regional cooperation: “Iran and Uruguay can make investments and run production and export plans in order to gain access to a portion of vast markets in Latin America, Central Asia and the Caucasus.”

The Iranian President went on to add that “Beyond economic and trade matters, there exist important matters in the world today like the environment and terrorism which demand consultation and collaboration among all countries.”

Rouhani urged global cooperation in the fight against terrorism and extremism, concluding “Currently, terrorism has displaced millions of people around the world and claimed thousands of victims; therefore we must all go hand-in-hand to combat this ongoing scourge.”

The Uruguayan Vice-President Raul Sendic, for his part, voiced Uruguay’s determination to bolster ties with Iran in all areas of interest.

“Iran and Uruguay are two friendly nations and trade partners with historical relations,” highlighted the visiting official, adding “The two sides possess vast capacities which need to be exploited in line with increased cooperation.”

Sendic, who is accompanied by a trade and business delegation, continued “Upon the activation of the Joint Economic Commission between the two countries, a new era will begin in Tehran-Montevideo relations, with energy and agriculture as major areas of cooperation.”

The Uruguayan official also emphasized the need for further coordination between Iran and Uruguay on regional and international issues.