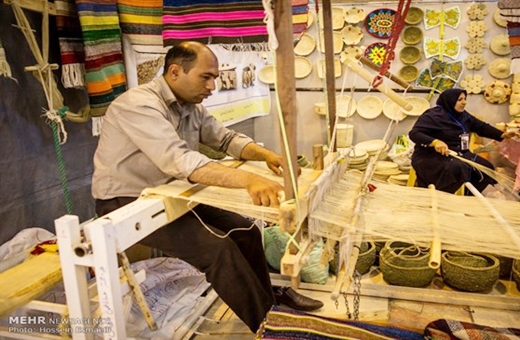 International section pavilions were run by Afghan craftsmen, while the majority of foreign guests invited to the fair were merchants who served as a link between producers and exporters. The top 30 pavilions in the fair can also take part in overseas exhibitions as Iran’s representatives.

Habib Malahi, a handicraftsman from Qeshm, Hormuzgan Province, told Iran Daily, “Qeshm is one the largest islands of the country. It is located near the Hormuz Strait in the Persian Gulf. Therefore, we produce marine handicrafts in view of Qeshm’s proximity to the sea.”

Qeshm handicrafts are made from aquatics in the Persian Gulf and the Sea of Oman such as snails, shells and marine stones. Also, taxidermy is performed on sharks and other sea creatures taken in by fishermen, and the stuffed aquatics are sold as handicrafts.

“Gold embroidery is one of the handicrafts of Qeshm Island,” he added.

Jalil Akrami, organizer of the Abarkuh Pavilion, said feltmaking, marquetry and giveh weaving (light cotton summer shoes) are major handicrafts of Abarkuh in Yazd Province. Feltmaking dates back 5,000 years in Abarkuh, he said. However, only two feltmaking workshops are currently operational in the region.

Akrami said sheep’s wool is used for making felt. Although the art of feltmaking is on verge of extinction, felt products are in great demand. Since felt is soundproof, they are used in buildings abroad, he said. Felt is also useful for relieving muscle aches.

Haminbas Takhteh, from the southwestern province of Khuzestan, said kapu weaving (baskets made of palm leaves) is a traditional art in Khuzestan Province.

Kapu baskets are containers used for keeping vegetables and fruits cool, she added, pointing out that a majority of low-income families, particularly female breadwinners, are involved in kapu weaving in Dezful.

Zinat, a woman who makes earthenware in Yazd Province, said her pottery is hand-crafted, and that lead-free enamel is used for decorating pottery works.

“We also put pottery works in the furnace twice. They are baked at a temperature of 1,000˚C so they become more durable.”

“Our pottery gained the national handicrafts seal due to their high quality.”

Ahmadreza Eskandar — an engraver from Isfahan — said the art of engraving dates back to the Achaemenid era.

It reached its zenith during the Safavid era, he said. Since the Safavid kings were fond of engraving, Isfahan became a hub for the craft.

Eskandar went on to say that engraved works from the Safavid era are currently displayed in international museums such as the Louvre in France and the Museum of London in Britain.

Engraving art is also widespread in provinces such as Markazi and Zanjan. Today, several thousand engravers are active in this field in Isfahan Province. Engravings are exported to European nations and Persian Gulf states, he added.

Ayoub Karimi, a cutler from Zanjan Province, said that the art of cutlery in the region has a history of 2,300 years.

It thrived during the Safavid era, he said, with 2,000-year-old mummies having been found in salt mines of Zanjan, along with their knives.

Zanjani knives are quite strong, he said, and are exported to Persian Gulf littoral states, European nations and East Asian countries.