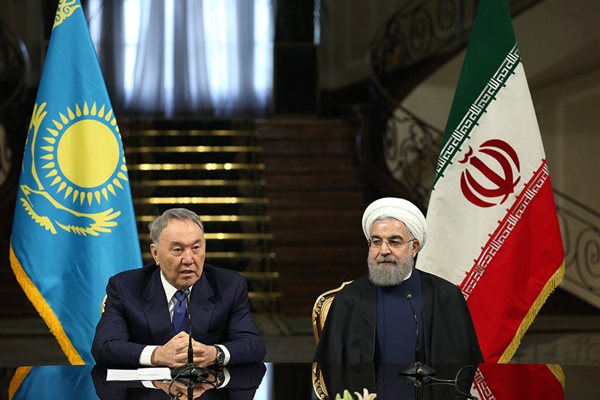 Kazakh President Nursultan Nazarbayev arrived in Tehran on Monday to chart a new course in bilateral ties with Tehran, inking 66 documents with a value of $2bn.

In September 2014, President Rouhani headed a high-ranking politico-economic delegation which paid a formal visit to Astana.

“Altogether, as many as 66 cooperation documents were signed between state and private sectors, which marks a landmark in bilateral ties between the two countries,” Rouhani noted in a joint press conference with his Kazakh counterpart on Monday.

Nine of the contracts were signed in the presence of the two presidents.

Rouhani also emphasized that the resumption of banking exchanges between Iranian and Kazakh central banks will facilitate inter-banking interaction, noting that supporting the private sector will encourage economic development.

The agricultural sector is a fertile ground for collaboration, particularly with Iran leasing agricultural land in Kazakhstan, Rouhani remarked.

Elsewhere in his remarks, the Iranian president maintained that the two sides also exchanged ideas on the legal status of the Caspian Sea, and its relevant maritime shipping, mineral, tourism, and environmental concerns.

President Nazarbayev, for his part, referred to the agreements made, saying, “66 contracts worth $2bn were signed, covering economy, trade, tourism, agriculture, and minerals.”

Also, ahead of the Organization of Islamic Cooperation (OIC) summit slated for April 14-15 in Istanbul, President Rouhani said that Iran and Kazakhstan are of the belief that the “The voice of the unity and cooperation of the Islamic world should be heard everywhere in the world.”

Related to this, the Kazakh president considered unity among Islamic nations necessary for battling terrorism, saying, “There should be no schism between Iran and Saudi Arabia and this should be resolved through dialogue.”

One day before Nazarbayev’s trip, Kazakh and Iranian governmental and private partners signed memorandums of understanding (MOUs) worth almost $1bn in bilateral trade.

It is expected that the contracts will open a new era of cooperation between the two countries, cementing ties in other areas including trade, transportation, technology, industry, banking, shipping, railways, information technology, and energy, Rouhani stated.

Among Central Asian nations, Iran has the strongest political and economic ties with Kazakhstan, which is the biggest country in the region.